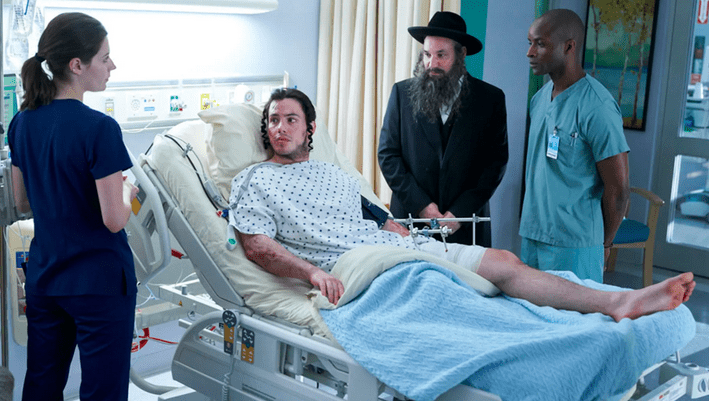 It’s important that we address the recent feedback we’ve received related to the portrayal of Jewish beliefs in the “Achilles Heel” episode of our series Nurses.

We take matters of this nature very seriously and deeply regret all inaccuracies related to religious beliefs as well as the negative portrayal of any religious community in our content, characters and storylines.

We sincerely apologize to the Jewish community, our viewers and series fans, and are working to understand what transpired and ensure our research practices are exhaustive moving forward and lead only to well-informed storylines.

Corus shares these concerns raised about the episode and have removed it from all digital platforms and future airings on our networks.”

Furthermore, the offending show was removed from Global’s (and NBC’s) digital programming after outcry from prominent Jewish organizations and leaders, including from HonestReporting Canada (HRC). See relevant coverage that highlighted HRC’s efforts in the Algemeiner and of this development via the Canadian Press.

In dialogue with the producers, HRC has encouraged the programmers to air content about the Canadian Jewish experience, Orthodox Jewry or about the resurgence of antisemitism and the disturbing rate of hate crimes targeting Canadian Jews.

Let this incident serve as a big teachable moment for Canadian and international broadcasters of the need to vet content before it goes on air.

HonestReporting Canada thanks Corus Entertainment, Global TV, and eOne Films for promptly addressing this matter, for its apology and for removing this antisemitic episode from its programming. We look forward to working with all companies to ensure that this doesn’t happen again.

We also would like to commend the efforts of Alison Josephs of Jew in the City for her work in exposing this issue to the world and to the combined advocacy efforts of B’nai Brith Canada, CIJA, Simon Wiesenthal Center, and other pro-Israel and Jewish organizations and advocates who also voiced their concerns.

It’s a television scene that, if one didn’t know better, looks like it was lifted straight out of an Iranian state-TV produced show.

An Orthodox Jew is in the hospital in need of a bone graft procedure in his leg, but he refuses, in part because of the feedback from his father, another Orthodox Jew standing beside him, who calls it a “dead goyim (non-Jew) leg” and who warns that the graft donor could have potentially been a woman, or an Arab. A nurse standing nearby sarcastically mutters in response: “God forbid an Arab woman.”

Watch this disturbing antisemitic segment here or below:

One can only imagine where the show’s creators concocted such a harmful, ignorant and stereotypical image of insular and bigoted, Orthodox Hasidic Jews, but it certainly was not based in reality. Unfortunately, that didn’t stop audiences from watching this obscene display on television. But it wasn’t broadcast in Iran or from any other country known for state-sponsored antisemitic propaganda; this time, it was homegrown Canadian content.

The medical TV drama show Nurses, which launched last year on Global Television and which airs on NBC, broadcast the clip featuring this antisemitic caricature of Orthodox Jews in an episode titled “Achilles Heel”. In recent months, the program was re-broadcast by affiliate partners in the US, Germany, Australia, France and elsewhere, giving it an immeasurably larger global audience. The show has been renewed for a second season in Canada, where it reportedly attracted around 1 million viewers per episode.

Worse yet, Canadian taxpayers have foot the bill for this television program which has spread demonizing images of Jews across the world. According to Variety.com, the program is a recipient of the Canada Media Fund and the Canadian Film or Video Production Tax Credit.

With respect to the content of the program itself, anyone familiar with Jewish law knows it does not stipulate refusal of bone grafts based on the religion or gender of the donor. In fact, Jewish law obligates Jews to set aside religious commandments if there’s a chance of saving someone’s life. It would not have been difficult for the creators of Nurses to reach out to any of Canada’s large number of religiously observant Jewish doctors, nurses or other medical professionals to find out the truth, or to consult with a local Rabbi. Tragically, they relied on antisemitic tropes from the Middle Ages instead.

During that period, Jews were murdered in indescribably brutal ways because of fictional stories told about them: that they conspired to spread the Black Plague across Europe, that they stole the eucharist from Catholic churches in order to desecrate it, that they abducted and murdered innocent Christian children to drain and drink their blood as part of a Passover ritual, and more. For these lies, Jews across Europe were murdered.

And while fortunately, the situation for Jews today is not the same, some of the underlying dangers remain. A 2018 poll conducted by CNN found that about four in 10 respondents in Poland and Hungary believe that Jews have too much power in international finance and business, and a quarter of respondents in Poland, Hungary, Austria, Germany & France said Jews have too much power in dictating international wars. In the United States, a poll published in 2020 by the Anti Defamation League (ADL) found that one in four respondents said Jews were responsible for the death of Jesus. Clearly, antisemitic attitudes don’t stop at international borders.

Today, Jews are being attacked in the streets of New York City, and synagogues have been attacked by gunmen elsewhere in the United States. In some cities in Europe, it is so dangerous for Jews that even Jewish communal and religious leaders instruct local Jewish populations not to wear external signs of their Jewishness, or to advertise their religion in any way.

The dangers of this kind of content on television cannot be overstated, because the problem is more than academic in nature. Jewish Canadians remain the number one targeted group for hate crimes across the country, year after year, despite representing only about one per cent of Canada’s overall population. While one cannot start to deduce logic or reason in antisemitic attitudes, it is clear that television content which borrows some of history’s most vile and grotesque caricatures of Jews only acts to inflame hatred of Jews, and could potentially even lead to more hate crimes against Canada’s Jewish population.

HonestReporting Canada has communicated these concerns directly to Corus Entertainment, which produces the show Nurses in partnership with ICF Films and EntertainmentOne, calling on the network to take immediate steps to mitigate the damage done as a result of this episode’s broadcast to the image of Jews, particularly religiously observant ones, and to engage with the Canadian Jewish community to ensure that no such demonization takes place in the future.

At bare minimum, Corus should issue an immediate apology and as NBC has reportedly done, should remove the Nurses’ episode from its digital programming and encourage other networks to do the same.

We will keep you updated about any developments on this alarming matter.