UNWRA’s Incitement to Terrorism and Anti-Semitism

On February 2, the non-governmental organization UN Watch, testified before a joint subcommittee hearing of the US Congress concerning UNRWA, the United Nations Relief and Work Agency for Palestinian refugees in the near east.

The new UN Watch report is entitled “Poisoning Palestinian children: A report on UNRWA teachers’ incitement to Jihadist terrorist and antisemitism” and you can read the complete 130-page report by clicking here.

Here’s a short excerpt from the report (emphasis added):

“In light of the foregoing, UN Watch urges all donor states—and in particular the U.S., the EU, the UK and Canada—to:

(a) Demand that UNRWA be in full compliance with its obligations, including each of the provisions outlined above, prior to donor states releasing any further funds to UNRWA;

(b) Demand that UN Secretary-General António Guterres and UNRWA CommissionerGeneral Pierre Krähenbühl immediately condemn their employees’ incitement to terrorism and antisemitism; and (c) Demand that UNRWA adopt a zero tolerance policy for employees who incite racism or murder by immediately terminating them, and prominently post on its website these and other actions it is taking to root out this insidious conduct by UN staff.”

As Canada is the 7th largest funder of UNRWA with its $25-million annual allocation, this news is particularly alarming. On November 16, the Canadian Press broke the news that the Liberal government agreed to provide $25-million dollars in aid to UNRWA, a UN relief agency for Palestinian refugees that was cut off by the previous Conservative government for alleged ties to Hamas. CP’s article was published in the following publications to list just a few: Globe and Mail, CBC.ca, Huffington Post, IPolitics, CityNews, Global News, Chronicle Herald, Toronto Star, Macleans and CTV News.

CP reported at the time that: “The government says the money will be accompanied by ‘enhanced due diligence,’ including a ‘very robust oversight and reporting framework’ that includes regular site visits and anti-terrorism provisions.”

The article detailed concerns that funds designated to UNRWA have been used for “military efforts against Israel,” and that there are concerns about UNRWA’s lack of accountability, neutrality, and the need for proper oversight. 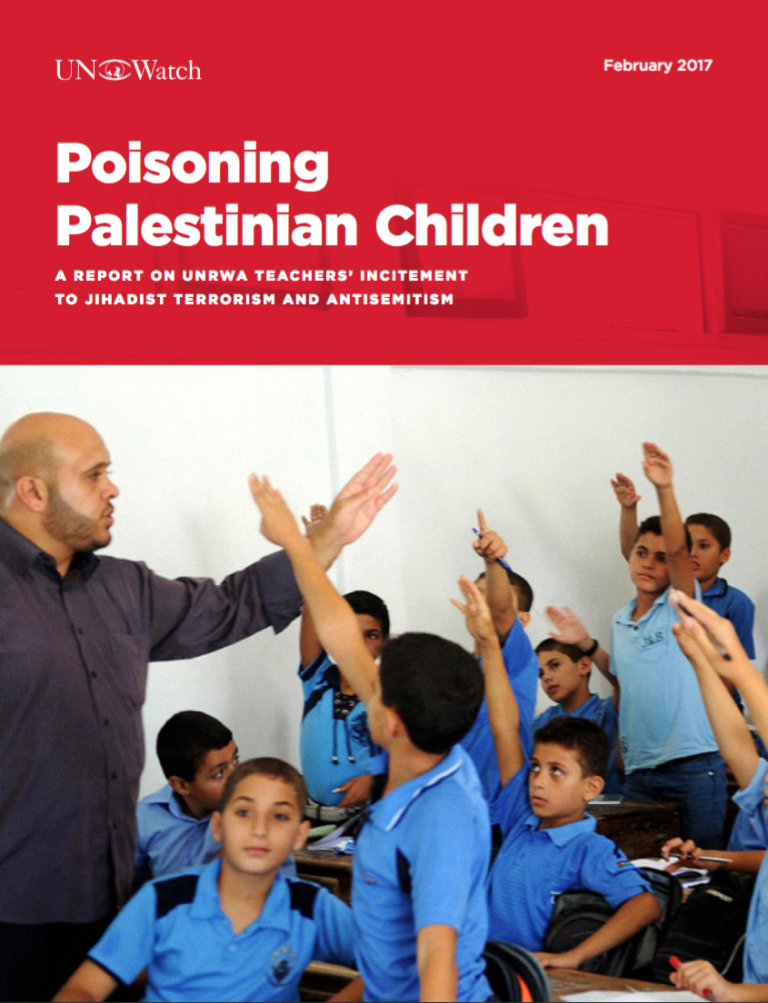 In the wake of the release of this report, UN Watch has called on all funding governments, including Canada, to immediately freeze funding for UNRWA schools until:

2. The U.N. conducts a full, independent commission of inquiry into the systemic extremism that plagues UNRWA schools.

Accordingly, the news of this report detailing UNRWA’s incitement to terrorism and antisemitism is alarming and has implications for Canada’s funding of UNRWA, given that International Development Minister Marie-Claude Bibeau assured Canadians that “there will be enhanced due diligence applied to UNRWA funding. Today’s funding is accompanied by a very robust oversight and reporting framework, which includes regular site visits and strong anti-terrorism provisions. A proportion of Canadian funding will also be used to expand training for staff on the proper and neutral use of social media.”

Even UNRWA spokesperson Christopher Gunnes has acknowledged that the statements made by these UNRWA staffers are “outrageous”. See his February 4th official statement here.

As the main wire service for Canadian news outlets, Canadian Press (CP) should update this important development to this story for the benefit of its Canadian readership. HonestReporting Canada has asked CP Editor-in-Chief Stephen Meurice to deploy his resources to cover reports of UNRWA teacher’s incitement to terrorism and antisemitism. We encourage you to echo our call to action by emailing CP directly at: stephen.meurice@thecanadianpress.com.