On May 31, many Canadian media outlets produced reporting which outrageously portrayed a Palestinian terrorist as a victim of Israeli aggression.

On a Friday going into the Jewish sabbath, a Palestinian terrorist stabbed two Israelis in Jerusalem’s Old City and was subsequently killed by responding Israeli security forces.

How did Canada’s media cover this repugnant terror attack by a bloodthirsty, knife-wielding Palestinian terrorist? The Toronto Star, National Post, and CP 24 all portrayed the attacker as a victim. Check out the following headlines and coverage which was based on reporting by the Associated Press wire service: 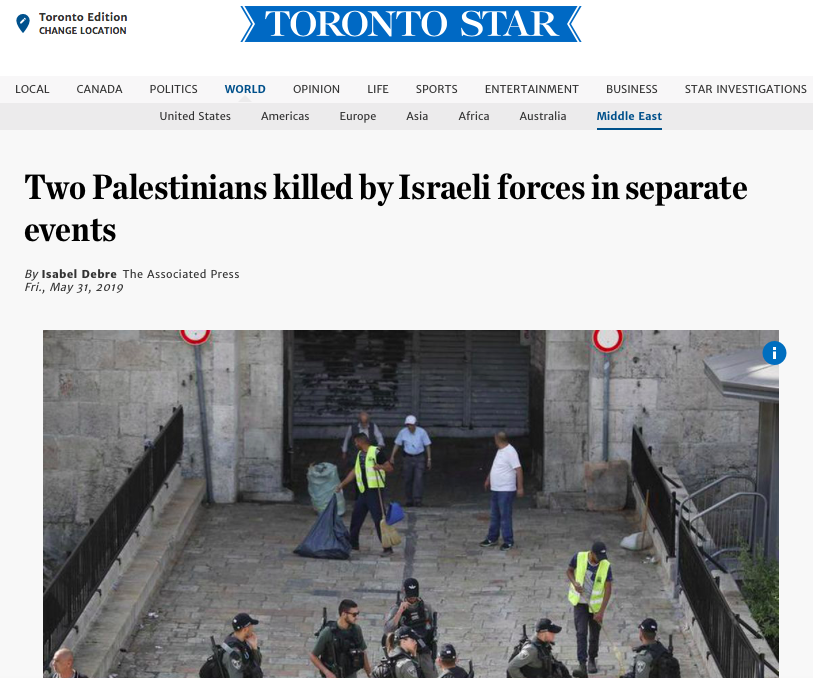 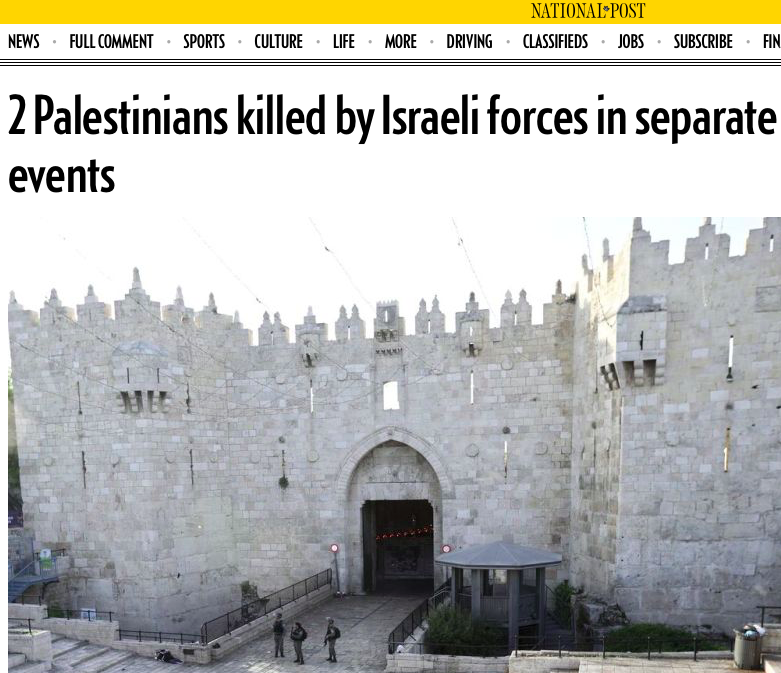 Watch CP 24’s reporting by clicking here or on the image below: 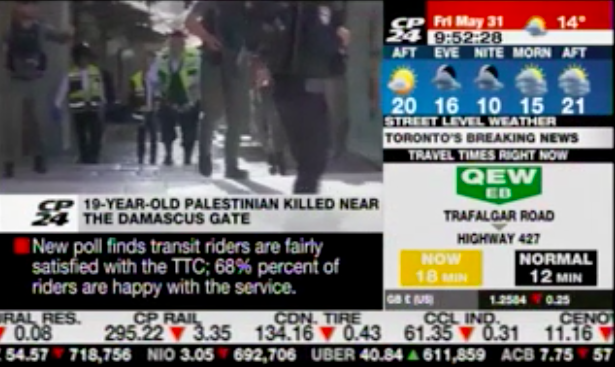 As you can see from the following surveillance video, one of the dead Palestinians stabbed two Israelis, quite seriously, in a terror attack at Jerusalem’s Damascus Gate. This has to be emphasized by our media, failing which, people may wrongly conclude that Israeli forces killed a presumably innocent Palestinian, whereas in sharp contrast, the deceased was an assailant.

As we told various Canadian media outlets, as headlines are read 3:1 over the adjacent article, ensuring that information is transmitted accurately and with context in headlines is of paramount importance.

While the Toronto Star has liaised with the Associated Press about this matter, we have yet to see any corrective action by the Star and other Canadian media outlets on this incident. In response to our concerns, the Star’s Public Editor, Kathy English, said the following in response to a complaint filed by HRC Executive Director Mike Fegelman:

Dear Mike: This is the headline supplied by the Associated Press – and one used by other news organizations, including the Washington Post. Most wire stories on the Star’s website are now published directly from the wires using the headlines provided by those services.As you know, in such cases of wire content the Star would issue a corrective only if the originating news organization did so.

As we told the Star, irrespective of who the source is of the report, the Star should ultimately take responsibility for the content hosted on its website. From our perspective, it behooves the Star to correct this headline. As it stands, the Palestinian terrorist is being portrayed as the victim.

Meanwhile, we did take note that the Associated Press did publish another article on May 31 on this matter which did acknowledge that Israeli police claim that the dead Palestinian was an attacker.

It’s incidents like this which helps to explain why the public has such little trust and confidence in our news media. This example affirms Malcolm X’s famous remarks that:

The media’s the most powerful entity on earth. They have the power to make the innocent guilty and to make the guilty innocent, and that’s power. Because they control the minds of the masses.”