Canadian news outlets rushed to indict Israel for the deaths of 16 Palestinians who were seeing refuge in a UN-run school in Beit Hanoun on July 24. Instead of being judicious about the incident, news outlets took Palestinian allegations of Israeli culpability at face value.

Several Canadian journalists presumed Israel guilty of the incident despite a dearth of evidence and prior to the IDF releasing the findings of its investigation. Israeli officials had contended that there is a very “high chance” that the shell that hit the UN school was shot by Hamas, either intentionally or waywardly.

The Jerusalem Post reports that the IDF’s investigation “found that Hamas terrorists fired at the army from within the school complex. The terrorists fired anti-tank missiles at soldiers, the army added. The IDF fired several mortar rounds in response. One IDF mortar fell in a yard near the school, which was empty, according to the military (watch video here). In light of the results of the investigation, claims that people were harmed inside school grounds, as presented after the incident by some, have been ruled out.” 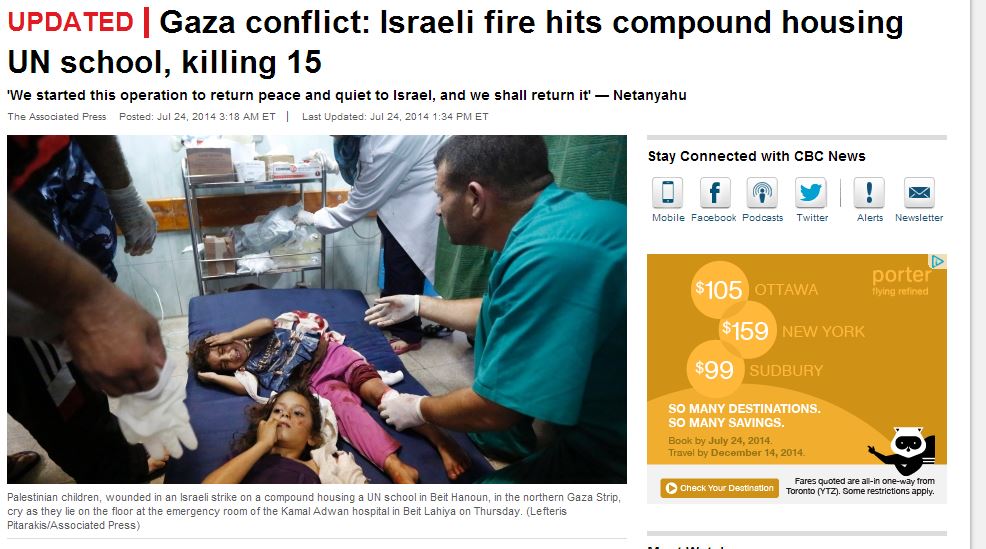 HRC subscriber Brian Henry, who in days prior prompted CBC.ca to retract its claiming that the majority of Gazans killed were children, conveyed the following to CBC editors about this myopic report:

“In fact it’s unknown whether this was an errant Israeli tank shell or Palestinian rockets. I also note that this story makes no reference at all to the fact that Israel states categorically that it did not target the school and never targets UN infrastructure and that if it was an Israeli shell and not one of the Palestinian rockets falling in the area, then it was an errant shell, a mistake. I also note that the article makes no reference to the Israelis having asked the UN to clear out the school because of terrorist activity and fighting in the area. Or that the UN failed to do so. Or that of course Hamas did not ask civilians to leave the area, but may in fact have blocked them from doing so.”

Following Henry’s complaint to the CBC, the story was revised and it now indicates the existing doubt about the tragedy at the school in Beit Hanoun and is overall much better balanced, though CBC never did publicly acknowledge or atone for its false and premature accusations. The CBC’s report now looks like this: 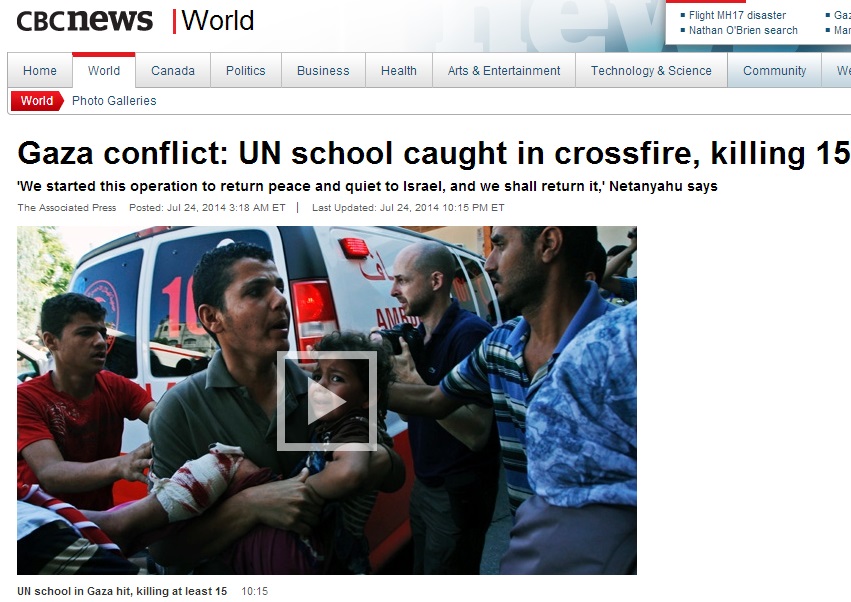 Indeed, Israel’s claims that Hamas terrorists hide their weapons in civilian areas was supported by two separate discoveries of missiles hidden within Gaza schools operated by the UN Relief Works Agency (UNRWA) and these rockets alarmingly went missing. UN Secretary General Ban Ki-moon said the following about the rockets found in the two UN schools: “The Secretary-General is alarmed to hear that rockets were placed in an UNRWA school in Gaza and that subsequently these have gone missing. He expresses his outrage, and regret, at the placing of weapons in a UN-administered school. By doing so, those responsible are turning schools into potential military targets, and endangering the lives of innocent children, UN employees working in such facilities, and anyone using the UN schools as shelter.” As well, IDF soldiers also uncovered a house rigged with explosives near a UN school in Gaza.

Ron Dermer, Israel’s Ambassador to the U.S. confronted CNN when its anchor ignored the aforementioned information and altogether blamed Israel for responsibility, watch the clip below:

For CBC TV, journalist Paul Hunter produced a report (watch here or below) that we feel lead most viewers to conclude it was Israeli culpability. Hunter remarked that the shelling was “believed to be an Israeli strike, though still unconfirmed,” but the CBC’s journalist went on to quote Palestinians in a voice-over blaming Israel, “we just want to live, and there are (Israelis) shooting at us… they hit a UN school says this woman. We have nowhere to go except the UN school, they are killing us…” Hunter did acknowledge that Israel is carrying out an investigation and noted that it was fighting Hamas fighters who hid in the area at the time of the strike, but this statement was immediately discounted when this report included a quote from an unknown Palestinian, in indirect attribution, saying in a dramatic conclusion that there were just “men, women, children, but no militants” in the UN school. CBC will likely try to argue away that it didn’t contend as a matter of undisputed fact that it was Israel’s fault, but viewers will most likely be unable to discern the truth. 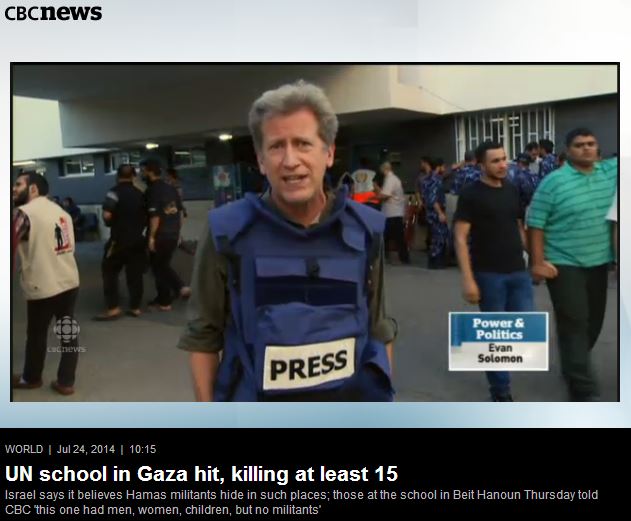 It’s important to note that she could have said the casualties came from “an errant Hamas rocket which apparently struck UN school,” but she did not. Mackey-Frayer’s colleague Joy Malbon also produced a report which on a positive note contained a lot of helpful context, but failed to acknowledge that Israel contends Hamas was responsible for the shelling.

In sharp contrast, the National Post quoted Israeli officials expressing a high likelihood that the shelling was done by Hamas. The Globe and Mail’s Patrick Martin included the following vital context in his reporting:” The deadly shelling happened in Beit Hanoun, a community of cinder-block houses with big families, in the northeast corner of the Palestinian territory. Because of its proximity to Israel, it’s been a popular place for militants to launch makeshift rockets against Israeli cities and towns. And it’s often the first place Israel invades when it crosses the border to force the militants to stop. In this conflict, it appears also to be the origin of several Hamas tunnels that pass under the Israeli border.” Finally, the Toronto Star reported that: “Israeli army spokesman Capt. Eytan Buchman told the Washington Post that Hamas may have fired the rockets during a battle in Beit Hanoun, and said the military was “very carefully reviewing the incident.” He accused Hamas of “using civilian infrastructure and international symbols as human shields. The UN reported earlier in the week that it had found Hamas rockets hidden in a vacant school that lies between two others where 3,000 refugees were seeking shelter.”

Importantly, the Toronto Star also issued a clarification notice on July 29 in response to an HonestReporting Canada complaint after a Rick Salutin column contained a caption which outright claimed Israel shelled the UN school. Commendably, the Star’s clarification reads: 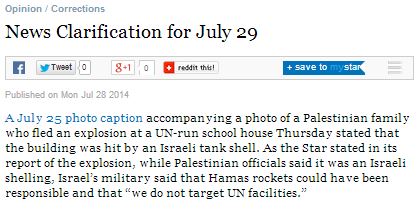 As Israeli Prime Minister Benjamin Netanyahu said as he pressed his nation’s case on America’s Sunday TV news programs, every Palestinian civilian’s death costs Israel in its fight for world opinion, but the Jewish state must not cede its security for the sake of public relations. Netanyahu said Palestinians are trying to shape global opinion with images of piled-up slain civilians. That is why terrorists like Hamas view the media as just another weapon to wield against the Jewish state and why Israel, and its advocates, must continue to fight media bias against Israel.