Why Are Anti-Israel Activists So Afraid of The...
McGill Tribune Publishes Op-Ed Calling for a Boycott...
Ontario Arabic Paper’s Editor Downplays Holocaust; Meshwar Describes...
How the War in Ukraine is Having a...
Toronto Star Columnist Shree Paradkar Wrongly Claims IHRA...
After Vancouver Adopts IHRA, CBC Radio Interviews Fringe...
Qatar Prepares For The 2022 World Cup: Will...
Lawfare: Who is Using the Law More Effectively?...
Official Publication of the College of Physicians and...
French Rapper Accused of Antisemitism; HRC Comments on...
Home Media Action Alerts2022 Canadian Media Ignore That Palestinian Killed By IDF Was A Terrorist

Canadian Media Ignore That Palestinian Killed By IDF Was A Terrorist 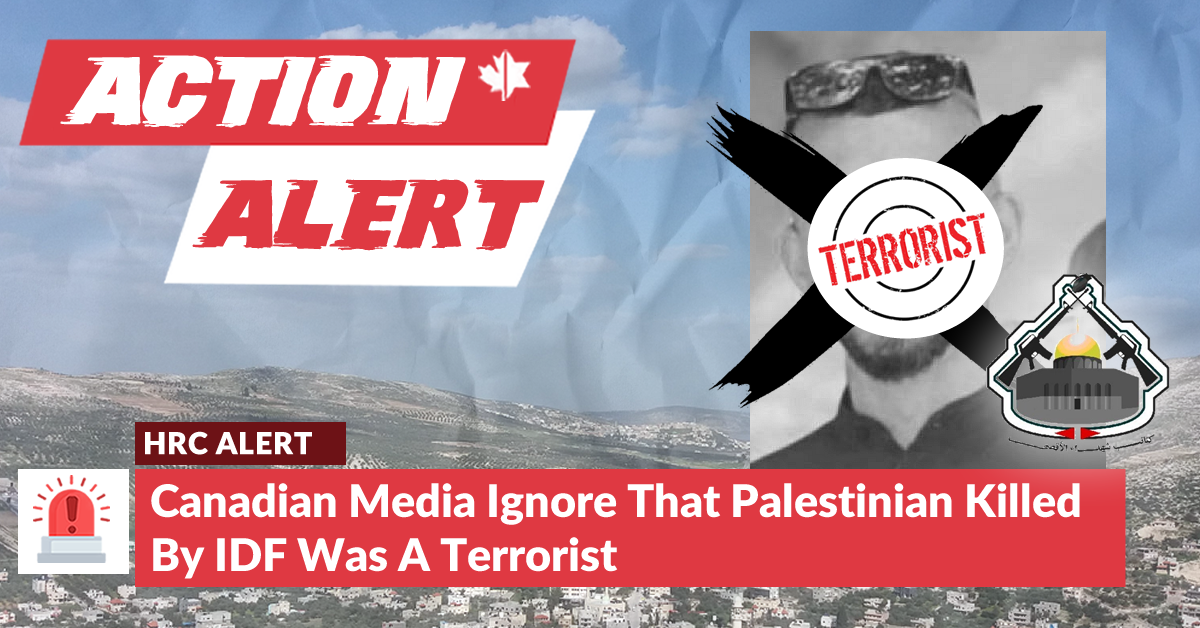 On July 3, Israeli Defense Forces soldiers conducted security patrols in the town of Jaba in Judea and Samaria or in media parlance, the “West Bank” and came under attack by a Palestinian terrorist who threw a firebomb.

In response, soldiers fired at the suspect who allegedly threw the firebomb and who died of his wounds sustained from Israeli fire.

The Palestinian Foreign Ministry identified the man as 19-year-old Kamel Abdallah Alwaneh, who resided near the city of Jenin, a hotbed of terrorist activity. Since March, 19 people in Israel have been killed in a deadly wave of terror, with many terrorists having originated from Jenin.

As the Palestinian Authority has failed to reign in terror activity, Israeli counter-terrorism operations like yesterday’s patrol are aimed at stopping terror attacks and protecting Israeli civilians.

In covering this incident, Canadian media outlets like the Toronto Star, National Post, and City News all published reports from the Associated Press which failed to mention that Alwaneh was reportedly a member of the Al Aqsa Martyrs Brigades, a Canadian-designated terror group.

Headlines from all 3 news outlets implied that the Palestinian was a presumably innocent civilian. The headline said only: “Palestinian dies from shot by Israeli troops in West Bank.”

Click below to see headlines from Canadian media outlets: 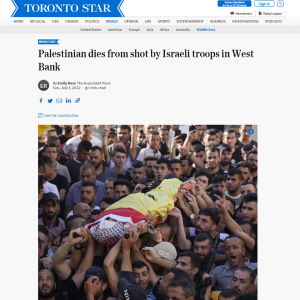 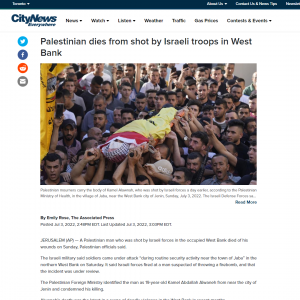 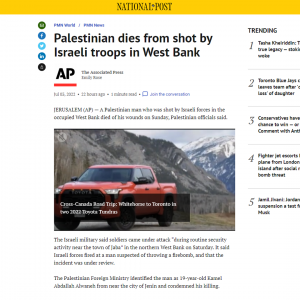 Importantly, the Al-Aqsa Martyrs Brigades issued a statement on the day of his killing saying that Alwaneh belonged to the group. Indeed, photographs of his funeral procession show him draped in the flag of the Al Aqsa Matryrs Brigades.

Al-Aqsa Martyrs Brigades issued a statement earlier today saying Kamal Abdallah al-Waneh was a militant belonging to the group. Al-Waneh died today from wounds sustained in clashes with the IDF on Saturday in the northern West Bank. pic.twitter.com/hICS5NFrpJ

The Brigades are considered the military wing of Fatah, the party of Palestinian Authority President Mahmoud Abbas. The group is known for having launched suicide bombings and for carrying out shooting attacks against Israelis during the Second Intifada.

The Associated Press, and Canada’s media that re-published its report, have a duty to disclose to its readers that this individual was a terrorist who allegedly threw a firebomb at Israeli soldiers.

Please reach out to the AP to call on the news organization to amend its reporting on this incident to acknowledge that Kamel Abdallah Alwaneh was a member of the Al Aqsa Martyrs Brigades terror group who allegedly threw a firebomb at Israeli soldiers. Use AP’s contact form now.