On Saturday, June 9, four Palestinian gunmen drove up to the Gaza-Israel border, breached the border fence and assaulted an Israeli guard tower in a failed attempt to capture an Israeli soldier. The Israelis killed one gunman, while three others escaped. 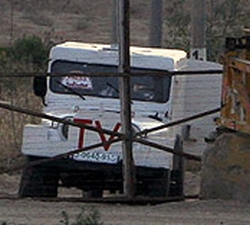 This latest attack comes almost one year after the kidnapping of Israeli soldier Gilad Shalit, still held hostage in Gaza. This time, however, the attackers used a new tactic: they disguised their jeep as a television truck to stage their assault. Associated Press photographs taken at the scene show a white armoured vehicle of the type reporters use, bearing red markings reading “TV” and “Press.”

A variety of groups condemned the use of a fake press vehicle to carry out the attack. The Foreign Press Association, an association of foreign journalists working in Israel and the Palestinian areas, declared:

“Armored vehicles marked with TV are an invaluable protection for genuine journalists working in hostile environments. The FPA has long campaigned for the continued availability of armored vehicles for its members, despite official opposition in some quarters. The abuse of this recognized protection for the working journalist is a grave development and we condemn those that carried it out. Such an incident will reduce the protection offered by marked vehicles.”

This very serious abuse of press credentials, which may endanger genuine reporters in the future, received some news coverage in Canada: see, for example, CBC’s Adrienne Arsenault (see video here), and Carolynne Wheeler in The Globe and Mail (see article here).

More significantly, though, not one of the Canadian news organizations whose reporters belong to the Foreign Press Association bothered to point out the seriousness of this incident in an editorial-type statement. Canadian media that use reporters who belong to the FPA include Canadian Press, CanWest, CBC, CTV, Global, Radio Canada, Globe & Mail, La Presse, Toronto Star, Toronto Sun, and Winnipeg Free Press.

This continues a long pattern of Canadian media failing to inform Canadian viewers of the different realities confronting reporters in Israel as opposed to the rest of the Middle East. (One notable exception was the murder of Zahra Kazemi in Iran.) In Israel, journalists are free to do as they please: indeed, that is why Canadian Middle East bureau chiefs, like CTV’s Janis Mackey-Frayer, CBC’s Peter Armstrong, and the Globe and Mail’s Mark MacKinnon, are stationed in Israel as opposed to, say, Egypt or Syria.

In Arab areas, the situation is different. 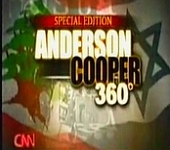 In Gaza, for example, journalists are kidnapped with some regularity. While most are released quickly, BBC journalist Alan Johnston has been held in captivity in Gaza for over three months. In the Israel-Hezbollah conflict last summer, reporters in Lebanon operated under serious restrictions and were often stage-managed by Hezbollah press officers. In a research paper released February, veteran reporter and Harvard faculty chair Marvin Kalb described “how an open society, Israel, is victimized by its own openness and how a closed sect, Hezbollah, can retain almost total control of the message of daily journalism and propaganda.” Indeed, last summer CNN’s Anderson Cooper exposed this situation in a special report (see video here). Yet throughout the war, Canadian media remained silent about the realities facing their reporters on the ground.

(For those news organizations interested in covering press freedom in the Middle East, there is no shortage of information. Reporters Without Borders, for example, lists the leaders of Iran, Libya, Pakistan, Saudi Arabia, Syria, and Tunisia among its “Predators of Press Freedom” and tracks violations of press freedoms in the Middle East.)

The Canadian news media’s continuing failure to communicate the differing conditions under which their reporters operate is a double-standard: while working under limited freedoms and, we must assume, self-imposed censorship from Arab areas, they allow viewers to believe they have the same freedoms as in Israel. And while taking full advantage of Israeli press freedoms — often in order to expose Israel’s flaws — they fail to acknowledge the very press freedoms in Israel that enable them to do so. This intense coverage of Israel, while overlooking the abuse of press and personal freedoms among its neighbors, gives viewers the false impression that the Middle East’s most progressive country is actually its most oppressive.

Is it really possible for foreign journalists to report fully and objectively from zones like Gaza while under threat of intimidation, violence or kidnapping? We don’t think so. Isn’t it time the media told the truth about press freedoms in the Middle East?