On July 20, several Canadian media outlets produced reports with unfair and misleading headlines about recent violence between Hamas terrorists and the Israeli military.

The Globe and Mail for example produced a report with the following headline:

Aside from being unfair, this headline was also incorrect. Firstly, the chronology of events began when an Israeli soldier was killed by a Hamas sniper who initiated this latest escalation in the recent violence. Following the sniper attack, the Israel Defense Forces carried out 15+ airstrikes on various Hamas targets in Gaza, killing four Palestinians, three of whom Hamas identified as its operatives.

The Globe should have identified these Palestinian casualties in its headline as being members of Hamas. Failing which, Globe readers who only look at this headline (whether on the Globe’s website or its social media platforms) may have concluded that Israel killed four (presumably) innocent Palestinians civilians vs. having successfully targeted legitimate combatants. As well, the chronology of the incident was also wrong on this headline as Israel’s retaliatory actions did not happen at or around the same time “as” its troops were shot at on the Gaza border, it happened after. Why did this headline wrongly depict Israel as the aggressor that initiated hostilities?

HonestReporting Canada notified Globe editors of our concerns and subsequently, the headline was amended and now states: 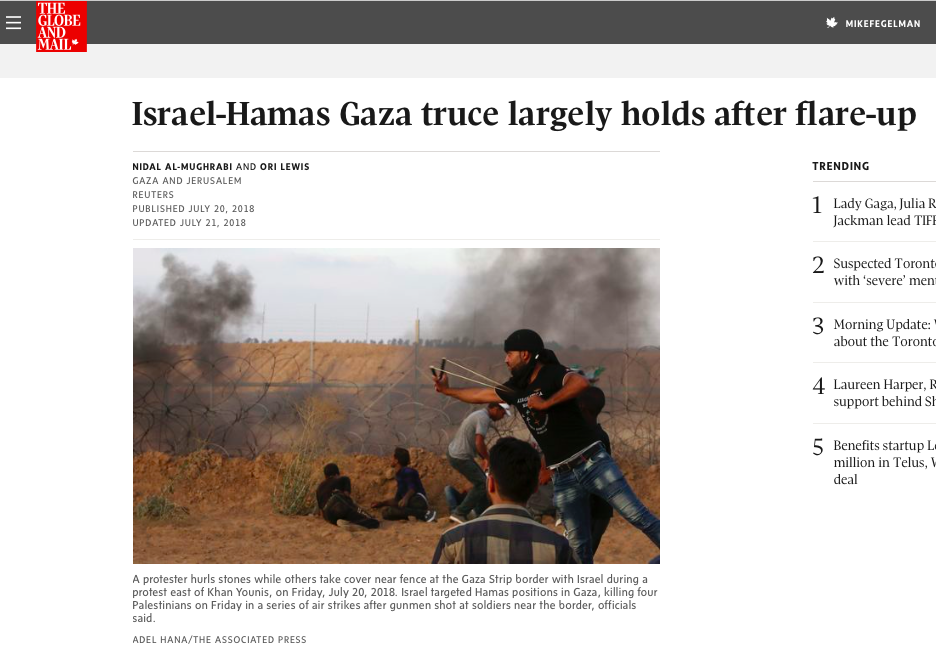 On July 20 as well, the Toronto Star published the following Bloomberg report to its website: 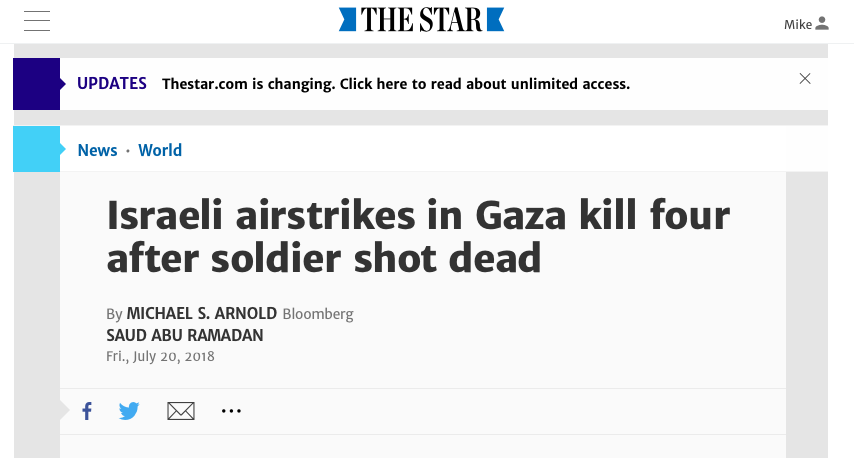 Though the Star got the chronology of the hostilities correct, Star editors failed to disclose that of the four Palestinians killed, three were identified by Hamas as being its own members. We told Star editors that even Bloomberg’s own wire headline clearly identified the casualties as being Hamas members in its sub-headline to this article which stated: “Four Hamas members killed in Israeli air strikes, group says”.

Regrettably, the Star declined to amend this headline. 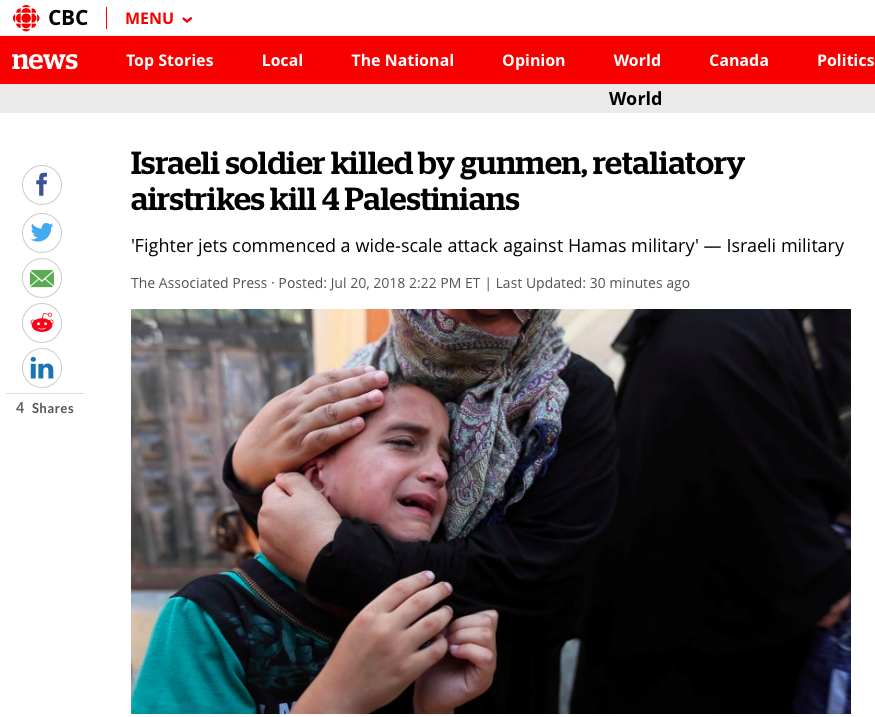 Just like the Globe and the Star, CBC also failed to disclose that three of the four dead Palestinians, Hamas itself identifies as its own members. CBC readers who only saw this headline and who didn’t read the adjacent article could have been mislead into thinking that Israel killed four innocent Palestinian civilians.

Also on July 20 at 6:10pm, CBC Radio reported the following by its anchor: ‘Israel says it’s carried out widespread airstrikes against military sites in the northern part of the Gaza Strip, four Palestinians died and an Israeli soldier was killed in a gun battle that erupted across the Israel-Gaza border.”

Again, the same mistakes were made and chronology of events inverted. Firstly, the Israeli soldier was killed in a Palestinian sniper attack, not a gun battle, after which, Israel carried out airstrikes that killed four Palestinians, 3 of whom were from Hamas.

HRC has called on CBC to take corrective action. We await the CBC’s response to our concerns.

Stay tuned to this page for any future updates.