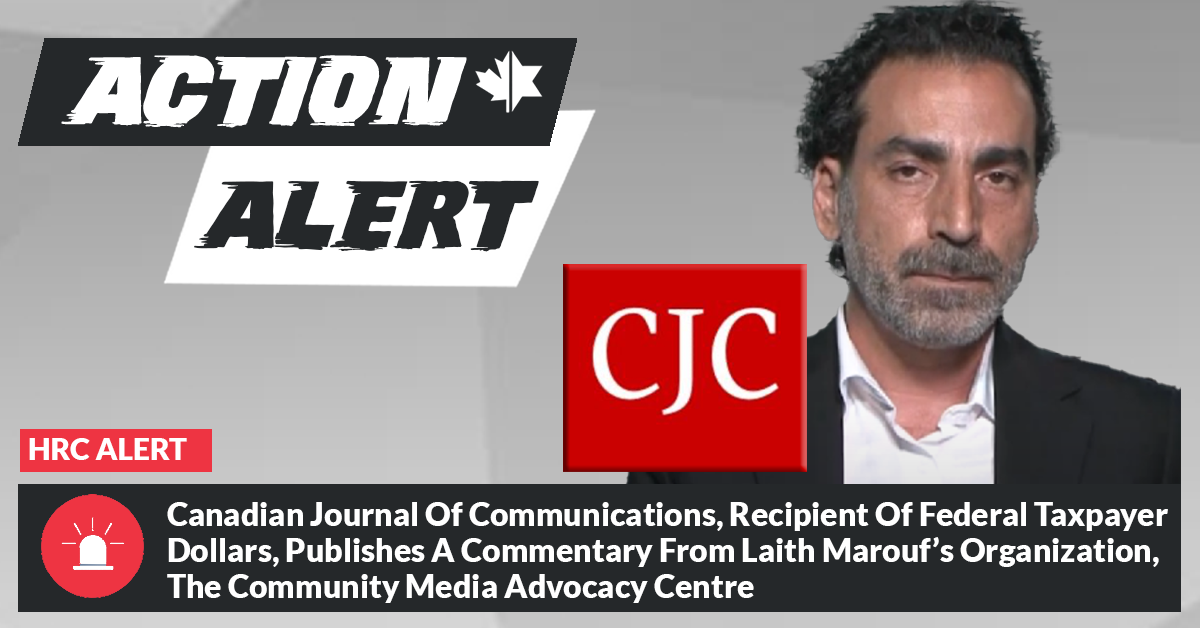 That month, Marouf, a Beirut-based consultant and founder of the Community Media Advocacy Centre, whose mission is described on its website as being “To disrupt settler colonialism and oppression in the media,” was revealed to have written comments online widely seen as being antisemitic in nature.

After his posts became publicized widely, Marouf was also suspended from Twitter, a decision which he blamed on the “Zionist lobby” pressuring the social media company.

But Marouf was not a garden variety anti-Israel propagandist; more troublingly, his dissemination of disinformation was also facilitated by taxpayer dollars he received from the federal government.

Marouf’s organization had received more than $130,000 in federal taxpayer funds from the Department of Heritage to run “anti-racism” workshops, in addition to more than $500,000 through the Broadcast Participation Fund, a body set up by the Canadian Radio-Television and Communications Commission (CRTC) to groups who participated in public broadcast hearings.

After Marouf’s comments became public, thanks to the research of media consultant Mark Goldberg and journalist Jonathan Kay, the federal government apologized, condemned Marouf’s words, committed to not hiring his organization again, as well as conducting reviews and audits of the decisions which led to the Community Media Advocacy Centre being given funds.

But it seems that wasn’t the entirety of tax dollars helping to prop up the work of Laith Marouf and his organization.

On December 19, the Western Standard’s Matthew Horwood published a report based on the research conducted by Blacklock’s Reporter entitled: “Subsidies continue for consultancy cited for Anti-Semitism,” which noted that the September edition of the Canadian Journal Of Communication had published an article from the Community Media Advocacy Centre, on the topic of the “lens of whiteness” in the field of broadcasting.

As reported by the Western Standard, the Canadian Journal of Communication receives $130,200 from the Social Sciences and Humanities Research Council, a federal research funding agency which, according to its website, “promotes and supports research and training in the humanities and social sciences.”

In this instance, while the Social Sciences and Humanities Research Council did not fund the Community Media Advocacy Centre, it funded the Canadian Journal of Communication who in turn provided Marouf’s organization with a platform. This is an example of Canadian tax dollars being used to legitimize an organization with an extremely controversial mandate, and a leader accused of spreading vile antisemitism on social media.

In late August, during the height of the scandal surrounding Laith Marouf, Prime Minister Justin Trudeau condemned Marouf’s comments and told journalists that it was “absolutely unacceptable that federal dollars have gone to this organization that has demonstrated xenophobia, racism and antisemitism.”

But condemnations, no matter how repeatedly or vociferously they are made, are simply not enough. As reported by the Globe & Mail’s Marie Woolf and Marieke Walsh, the federal government was notified as early as July about Marouf’s hateful tweets, but the matter did not snowball into action until a month later, when it became public.

As such, the federal government is duty-bound to not only condemn – as it has done – Marouf, but as demonstrated in the publishing of his organization’s newer essay in the Canadian Journal of Communication, institute concrete and measurable steps to ensure that Marouf and others like him are never again given the opportunity to spread their toxic bigotry to Canadians, using Canadian tax dollars.

The buck doesn’t only stop with the federal government; it is also the responsibility of news media outlets to hold all levels of government to account, and in this case, that means ensuring that as promised, Marouf’s organization does not receive another nickel from Canadian taxpayers or a platform to spread vile, anti-Israel and antisemitic indoctrination.