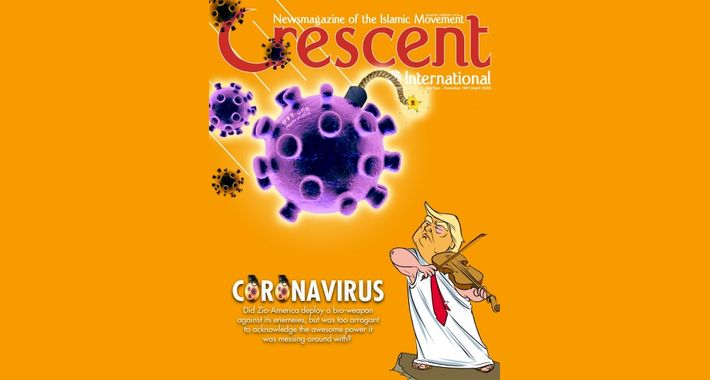 As reported by Lt. Col. (ret.) Jonathan D. Halevi on April 25, the Crescent International, a monthly news magazine from Institute of Contemporary Islamic Thought (ICIT) led by Canadian Muslim Imam Zafar Bangash, published an article about the possible origin of the Coronavirus (COVID-19) which speculated that Zionist drones carried out “germ warfare” to spread the virus. The commentary also included the antisemitic trope and conspiracy theory that U.S. President Donald Trump is “Zionist controlled.”

In a commentary written under the pen name “Abu Dharr,” the following was written:

The whole world is abuzz with news and analyses about the Corona virus (Covid-19). The mainstream media talking-heads are stuffing our heads and plugging our ears with all sorts of scenarios about how dangerous this vicious virus is – potentially devastating the lives of millions of people around the world. All of this is reminiscent of the hullabaloo that accompanied September 11, 2001 with all its panic panorama and scare tactics…

Far away from the carefully crafted replica reporting on this Corona virus, the Islamic Republic of Iran stands out for having an excessive and disproportionate number of officials contaminated by this virus…

Would it be challenging common sense to speculate that a very small drone, flying under the radar, and remotely controlled by technicians in Zionist, American, or Arabian [Saudi Arabia] military bases, hovers over the residence or parliament or any other meeting place of officials of the Islamic Republic, and then releases a type of Corona virus that trickles down into the target area where the individual(s) is and he then unknowingly becomes a victim of the virus? The drone then flies back or self-destructs and no one has proof of anything. Is this type of germ warfare disallowed by Mossad [Israel’s intelligence agency], the CIA [US’s intelligence agency], or MI6 [UK’s intelligence agency]? Of course not. This is their line of work…

Verily, he [al-shaytan] [Satan] and his corresponding personas are lying in wait for you where you cannot perceive them. [Quran, Chapter] Al-An‘am, [verse] 27″

The article also stated that: “The majority of US military personnel, be they enlistees or officers, are sick and tired of indulging in senseless violence, idiotic wars, and crazy crusades around the world. The Zionist controlled president in the White House and his advisers know this very well.”

According to B’nai Brith Canada: “Crescent International: Newsmagazine of the Islamic Movement has carried articles falsely blaming “Zionists” for the March 2019 massacre at two mosques in New Zealand, alleging that the 6-million figure of Jewish Holocaust victims is “exaggerated,” and predicting that “Muslims will deal the deathblow to Yahud,” the Arabic term for Jews.”

According to the Crescent International website, they list a P.O. Box in Gormley, Ontario as their primary address.