In a post on Facebook on July 8, Nazih Khatatba, the Editor of the Canadian Arabic newspaper Meshwar, mourned the death of Ahmed Jibril, the former leader of the Popular Front for the Liberation of Palestine (PFLP) who was an arch-terrorist and murderer with blood on his hands. 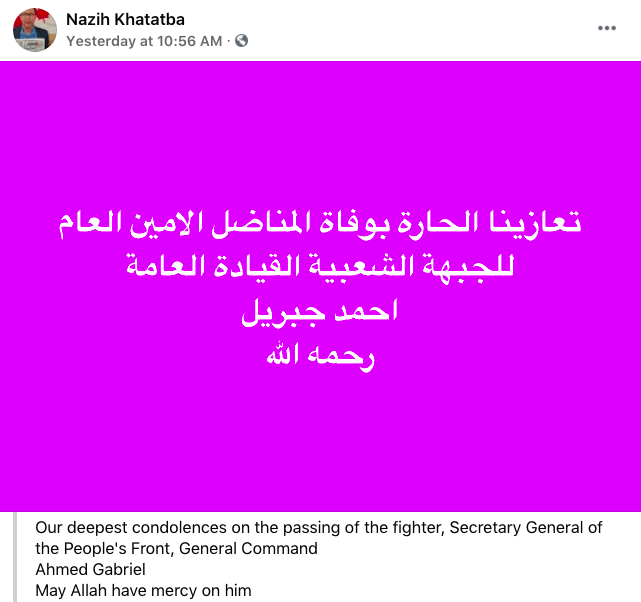 Khatatba’s mourning the death of Jibril, the leader of the Canadian-proscribed terror group PFLP, is morally repugnant.

As Ynetnews reports, the PFLP was was responsible for the hijacking of an El Al jetliner in 1968 and machine-gunning another at Zurich airport in 1969. In 1970, it planted a time bomb on a Swissair jet that blew up on a flight from Zurich to Tel Aviv, killing all 47 onboard. On May 22, 1970, PFLP-GC gunmen attacked an Israeli school bus at Avivim, killing 12 civilians, nine of them children, and wounding 25 others.

Meshwar is known for engaging in antisemitim as B’nai Brith Canada notes. In 2021, the CJN reported that Meshwar ran a piece lavishing praise on Muhammad al-Tous, who murdered five Israeli civilians in 1984-85. In 2020, it was accused of publishing blood libels. In 2014, it praised a massacre at a Jerusalem synagogue, has called Judaism a “terrorist religion,” and blamed Jews for the Holocaust and glorified suicide bombings.