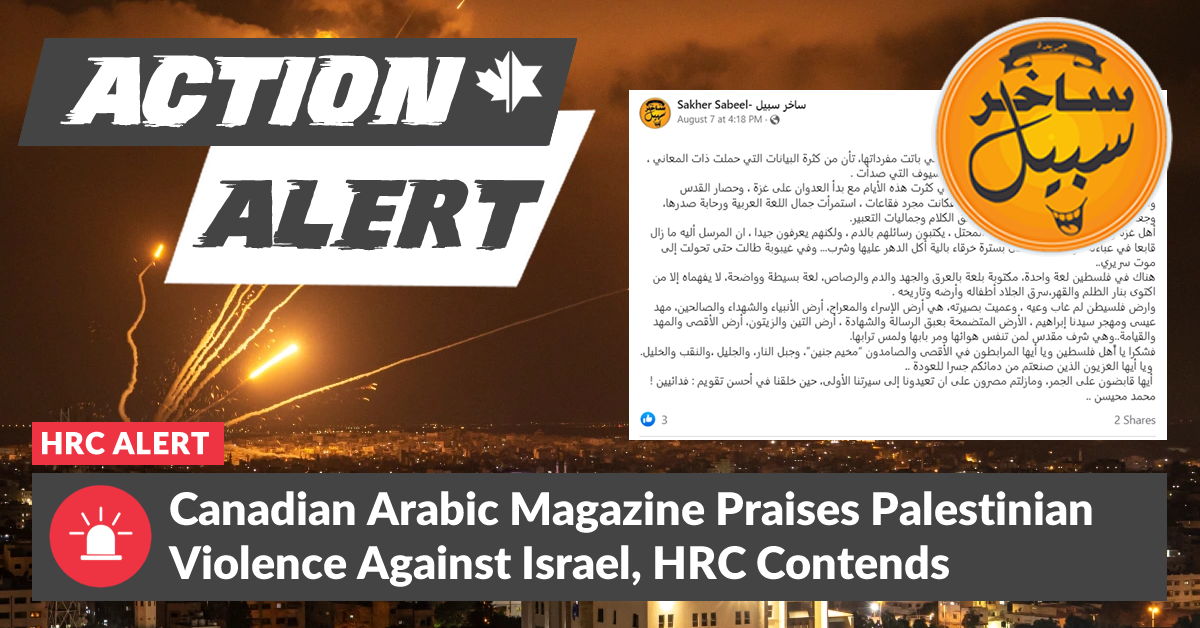 Sakher Sabeel is a monthly Arabic-language Canadian magazine covering local events in the Arab community, mainly in the GTA. 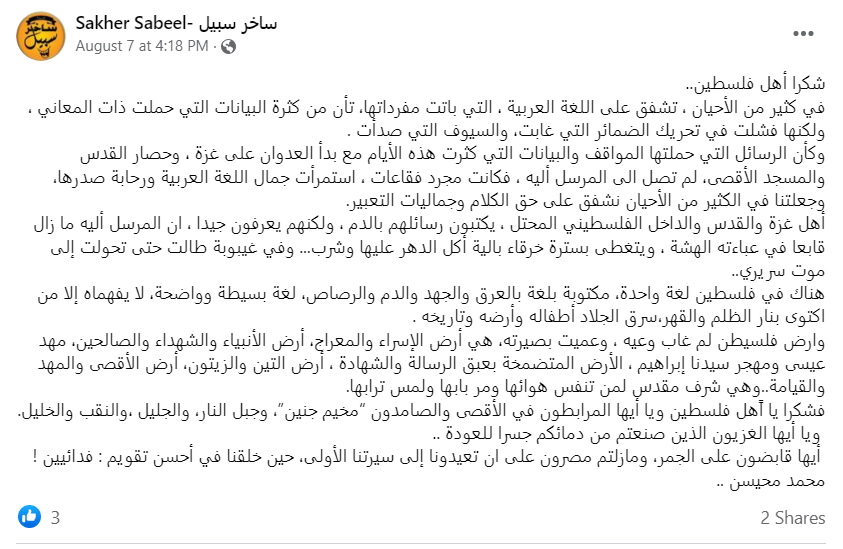 A post signed by Muhammed Muhaisin said the following:

“Thank you, the people of Palestine.

“The people of Gaza, Jerusalem, and the occupied Palestinian interior [Israel] write their messages in blood. However, they know very well that the recipient [Israel] is still in his fragile cloak, covered with a clumsy, ancient, worn-out jacket… and in a coma that lasted until it turned into clinical death.

“There is one language in Palestine, written in a language of sweat, effort, blood, and bullets, a simple and straightforward language, which only the one who got burns from the fire of injustice and oppression can understand, and [the one whose] executioner stole his children, land, and history.

“Thank you, the people of Palestine, and you who are stationed in Al-Aqsa [Mosque] and are steadfast in the “Jenin camp,” the Mountain of Fire [Nablus], the Galilee, the Negev, and Hebron.

“O you Gazans, who made with your blood a bridge to return [to Palestine as conquerors]!

“O, you who hold on to the hot coals [involved in fighting], and still insist on bringing us back to our first path when we were created in the best form: guerrilla fighters!

HonestReporting Canada has independently verified the translation of Sakher Sabeel’s post from the original Arabic.

Also on August 12, 2022, Sakher Sabeel’s Facebook page shared a post by Yossef Saraireh that featured an image of Huda Jarrar, Ibrahim Al-Nabulsi’s mother, accompanied with the following text: “The most beautiful mothers. #Salute to the mothers of our righteous martyrs. #Cartoons.” 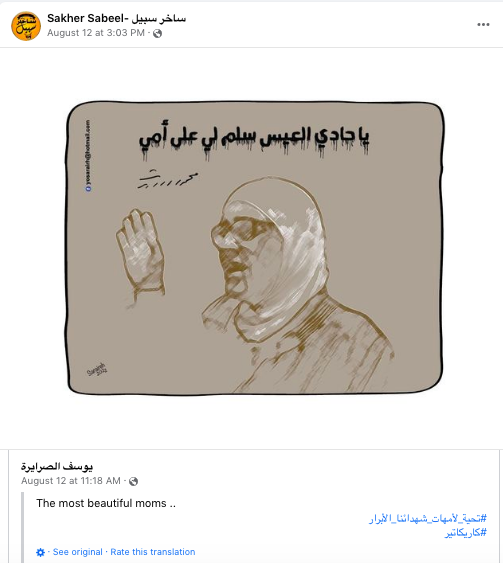 According to Reuters, Al-Nabulsi was a senior commander of Fatah’s Al-Aqsa Martyrs Brigades and a member of the recently formed “Nablus Brigade,” a Palestinian terrorist alliance in the city that also includes Islamic Jihad’s gunmen. On August 9, Israeli forces surrounded Ibrahim al-Nabulsi’s house in Nablus, at which point, the terrorist barricaded himself inside, refused to surrender and was killed along with another “militant” during a gun battle with Israeli forces.

According to the IDF: “Palestinian terrorist Ibrahim Al-Nabulsi was suspected of carrying out shooting attacks on civilians & IDF soldiers in the Nablus area. This morning [August 9, 2022], Israeli security forces conducted a counter terrorist operation to neutralize him.”

The Al-Aqsa Martyrs’ Brigades is designated as a terrorist organization by Israel, the European Union, Canada, Japan, New Zealand, and the United States.

In an interview for Hezbollah TV channel Al Mayadeen, the mother of Ibrahim Al-Nabulsi Huda Jarrar said: “My son was the source of my strength, and he was my role model… Do not forget martyr Ibrahim, and do not forget his will… Whoever loves Ibrahim will carry out his will and won’t abandon arms… for he was martyred for upholding the word of truth.”

In an August 4 HRC media action alert, we condemned this Arabic magazine for publishing a tacit denial of Israel’s right to exist and for featuring content that we and the International Holocaust Remembrance Alliance, (IHRA) consider antisemitic.

Sakher Sabeel deserves to be named and shamed for their toxic and hateful anti-Israel efforts, and for publishing posts on its Facebook page that praise Palestinian violence against Israel. Share our alert now to spread the word.