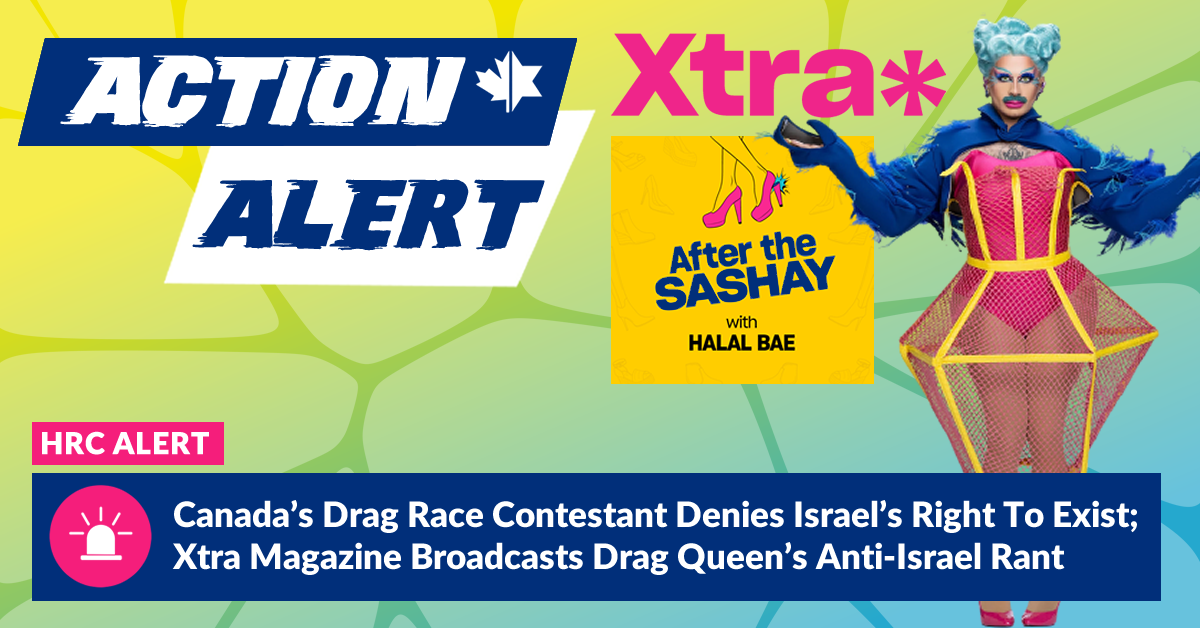 Canada’s Drag Race is a reality television program aired on Bell Media’s Crave streaming service which features a competition among 12 drag queens who compete for the title of “Canada’s Next Drag Superstar.”

The contestants try to win a grand prize consisting of $100,000 and a year of upscale hotel stays. Each week, Xtra Magazine, a digital publication aimed at Canada’s LGBTQ+ population, publishes a short video on social media called After the Sashay covering the drag competition.

In the July 18th edition of After the Sashay, drag queen Sherif Taalab, performing under the stage name Halal Bae, was interviewed by host Russ Martin about the drag performer’s elimination from the show. Unfortunately, the interview quickly devolved from a discussion of fashion into a platform for unrepentant Israel-bashing.

Martin asked Talaab about the contestant’s recent costume on Canada’s Drag Race, which was a dress festooned with the words “Stop Displacing Us.”

“When the occupation started in the ‘40s, she was kicked out of her home in Jerusalem. So was the rest of my family. That occupation continues to this day,” Talaab told Martin.

‘Canada’s Drag Race’ Season 3: After the Sashay with Halal Bae

While many critics who accuse Israel of “occupying Palestinian land” claim the Six Day War in 1967 as the genesis of the so-called occupation, though Israel strenuously disputes this, Talaab goes a step further. By claiming that Israel’s “occupation” began in the 1940’s, Talaab is arguing that Israel’s independence in 1948 from the United Kingdom was already an illegal occupation, meaning that Israel has no right to exist at all.

While Talaab later clarifies that because Israel has “been there for 70 years, there’s no changing that,” the damage has been done. By denying Israel’s legitimacy, Talaab drives a dagger into the heart of the Israeli-Palestinian conflict: Israel’s legitimacy and the right of the Jewish people to self-determination in their historic homeland. Talaab acknowledges allegations of antisemitism, but claims they’re unfounded, partially, as the drag contestant claims to have Jewish friends.

But that wasn’t the end of Talaab’s allegations against Israel. Talaab also claimed that Israel builds “illegal settlements that go against international criminal law,” and that Israel’s actions “resemble settler colonial occupation.”

While oft-repeated, claims of illegal Israeli settlements are without foundation. Israel has indeed constructed residential communities throughout Judea and Samaria – commonly called the “West Bank” – but these communities are far from illegal under international law. Rather, because the land in question was never the possession of any Palestinian state, according to experts in international law, there cannot be a legal claim made by a non-existing prior state.

Nevertheless, Israel has repeatedly offered to dismantle the homes of its own citizens in the pursuit of peace, but tragically these offers have been met with violent rejectionism on the part of the Palestinian leadership.

As for Talaab’s claim of Israel’s alleged “settler colonial occupation,” one is reminded of Hitchen’s razor, a general rule coined by the late author Christopher Hitchens, who wrote that “what can be asserted without evidence can also be dismissed without evidence.” In other words, by merely regurgitating commonly-cited anti-Israel buzzwords, Talaab has not presented a persuasive, let alone even coherent, argument.

However, suffice to say that Israel in no conceivable way resembles a “settler colonial” state. Israel, as the world’s only Jewish state, is home to the world’s largest Jewish population who, with three thousand years of history, can claim unambiguous indigeneity to the Land of Israel. Israeli Jews today walk in the same footsteps as their ancestors did three millennia ago, and no amount of woke phraseology will undo this indisputable reality.

While Talaab spoke about being a proud queer individual in a majority Muslim country, but the drag contestant did not mention the rampant persecution of LGBTQ+ individuals in Gaza and the “West Bank”. As noted by Emily Schrader in the Jerusalem Post: “According to Palestinian law, being gay is punishable by up to 10 years in prison and in Gaza, it’s punishable by death. In 2016, Hamas executed a senior commander by firing squad in Gaza for homosexual activity. LGBTQ+ Palestinians have no legal protections against discrimination, are forbidden from adopting and gay marriage is not recognized in any capacity.” As the saying goes: Queers for Palestine, if you know what life is like under Palestinian Authority and Hamas rule, is like Chickens for KFC.

Xtra’s “After the Sashay” bills itself as a discussion surrounding drag queens fitting themselves into elaborate costumes and vying to be Canada’s Next Drag Superstar, but the only thing ill-fitting in this episode was Talaab’s painful diatribe denying Israel’s right to exist and Jewish indigeneity in the land of Israel.