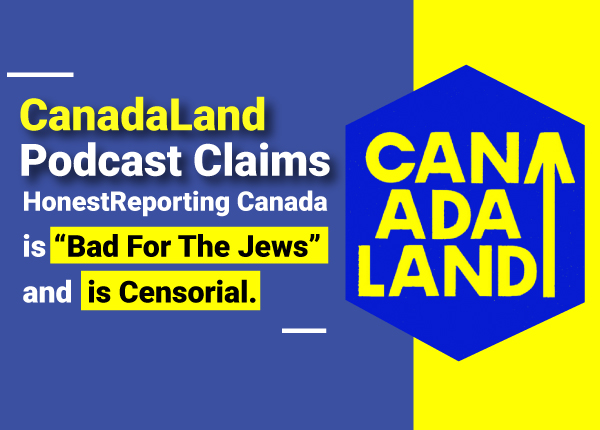 CanadaLand describes itself as a news site and podcast network that does media criticism focused on Canadian media, news, current affairs, and politics. The show proudly boasts that it’s been regarded as “libelous bilge,” “icky,” “unwashed gossip bloggers,” and for being “smug, loud-mouthed… easy to dislike.”

In its most recent podcast in the week of May 20 (click here to listen and queue to the 32:40 mark), the program’s host commented on HRC’s recent success where we prompted CBC Radio-Canada to delete an error-plagued, unfair and unbalanced article it published which blamed Israel exclusively for Gaza’s plight in fighting the Coronavirus.

In our alert, we pointed out 10 ways in which the article was biased and the CBC agreed with our analysis that their reporting fundamentally violated the CBC’s own Journalistic Standards and Practices. The CBC elected to unpublish their article entirely from the CBC’s website. 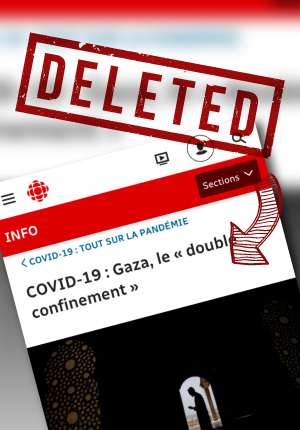 Canadaland’s podcast talked about “the story about Gaza that the CBC disappeared,” claiming that HRC’s efforts were nothing more than censorial and that we “overstate(d) our case.”

According to the program’s host, HonestReporting Canada “is very good at what it does, they are aggressive at monitoring the media and exerting pressure on the media…. and especially with HonestReporting, they do so doggedly and I know a lot of journalists feel overwhelmed by the attention that these groups give, and singled out at times, they will go after a specific reporter…”

The host then claimed that HRC’s efforts contribute to the antisemitc trope that “Jews have an undue influence over the media.” Canadaland claimed that HRC is a “well-funded” “Jewish lobby group” that “bullied” Radio-Canada into deleting its own article.

HRC’s efforts, according to Canadaland’s hosts, support and perpetuate “the idea that Jews have some kind of control or conspiracy or some kind of undue influence on the media, that is not the case, the truth I believe is just that they are relentlessly doing what a lot of other groups do, they do it particularly well and I want them to stop.”

HonestReporting Canada, according to Canadaland’s host, “It’s bad for the Jews!”

What’s important to note is that Canadaland made these claims prefaced by its own host’s acknowledgement that he has “not done any independent research into what exactly is happening in Gaza.” Meanwhile, Canadaland conceded that “some quotes from Israeli officials would have been helpful” had they been in the original CBC Radio-Canada article.

Firstly, we wish HonestReporting Canada were “well-funded,” but like Canadaland, we rely on the grassroots support from our subscribers. Secondly, We are not a Jewish organization; our board, staff and subscribers are all multi-faith. Instead, we are a non-profit organization that is exclusively dedicated to ensuring fair and accurate Canadian media coverage of Israel. Full stop. Lastly, if the work that we are doing is done by a lot of different organizations for varying special interests, then what’s the problem?

Finally, as to Radio-Canada’s decision to unpublish its article, it’s important to note that Radio-Canada unilaterally made this decision, HonestReporting Canada did not ask that the article be unpublished, we only asked for remedial action to be undertaken by CBC Radio-Canada.

Leave it to Canadaland to serve up some shoddy journalism of its own in its feeble effort to tarnish the reputation of HonestReporting Canada.