Should Canada move its embassy in Israel to Jerusalem, Mohamed El Rashidy of the Canada Arab Federation (CAF) said on CTV’s Question Period on January 19, “opens the door to violence” to achieve Mideast goals. Watch the clip here or by clicking below: 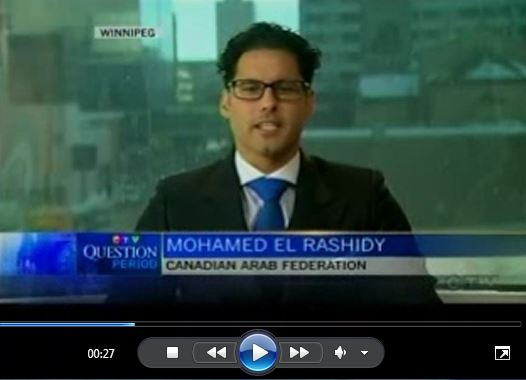 At 11:12am on the program, El Rashidy, the Vice President of the Western Region of the Canada Arab Federation said: “… Listening to the ambassador’s proposing some real fundamental and ground shaking changes that would really overturn Canadian foreign policy for decades, the Stanley Commission made it very clear that it is a very bad idea to move something like the embassy to Jerusalem. Recognizing land that is taken by force as part of Israel’s territory and accepting that really opens the door to violence as the only means to achieve your goals in the Middle East. That’s not a message Canada should ever support or stand with. What was illegal in the past should stay illegal today, because it still is illegal and that’s what settlements are. Taking land from Palestinians and making them for Jewish-only homes is just wrong. It’s wrong according to every reasonable country around the planet and Canada should not exit that group of reasonable countries.”

If Canada makes the sovereign political decision to move its embassy in Israel from Tel Aviv to Jerusalem, according to this CAF spokesperson, paves the way for people to employ violence to achieve their Mideast goals. Was this an implicit threat of violence against Canadian politicians? Does CAF condone violence against innocents?

Yet again, another further validation of why it was wise and prudent for Canada to cut-off funding for the Canada-Arab Federation, which has been accused of supporting the actions of terrorist organizations.