UPDATE: The Herald published HonestReporting Canada’s response in the April 21 edition of its newspaper and online. 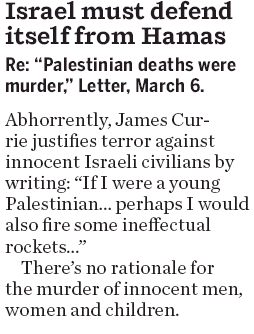 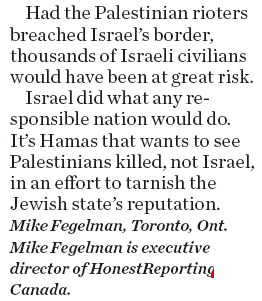 Abhorrently, in the April 6 edition of the Calgary Herald, editors at this PostMedia-owned newspaper published a letter (see full text below) by Calgary-resident James Currie who justified terror against innocent Israeli civilians by writing: “If I were a young Palestinian with no hope for the future, perhaps I would also fire some ineffectual rockets, as a sign of resistance to oppression.”

Importantly, there’s no rationale for the murder of innocent men, women, and children.

With respect to charges of “brutality”, it’s the Hamas terror group which incited tens of thousands Palestinians to protest/riot along the Gaza border with Israel recently, putting the lives of innocents in grave danger. Hamas financed the riots, armed and indoctrinated the rioters, and financially rewarded those who were killed when engaging in the riots.

Had the Palestinian rioters breached Israel’s border, thousands of Israeli civilians would have been at great risk.

If Mr. Currie cares about morality, where is his condemnation of Hamas’ encouraging a 7-year-old to participate in the riots? Important, the Egyptian-Israeli blockade of Gaza is in place to prevent Hamas from re-arming. This is the same organization which has fired tens of thousands of rockets at Israel, which dug terror-attack tunnels and which is committed to Israel’s destruction and the genocide of Jews.

Israel did what any responsible nation would do. It’s Hamas that wants to see Palestinians killed, not Israel, in an effort to tarnish the Jewish state’s reputation. 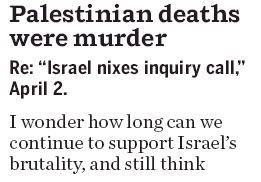 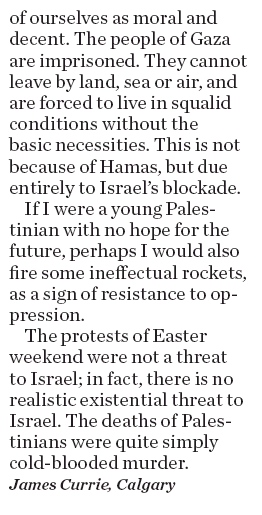