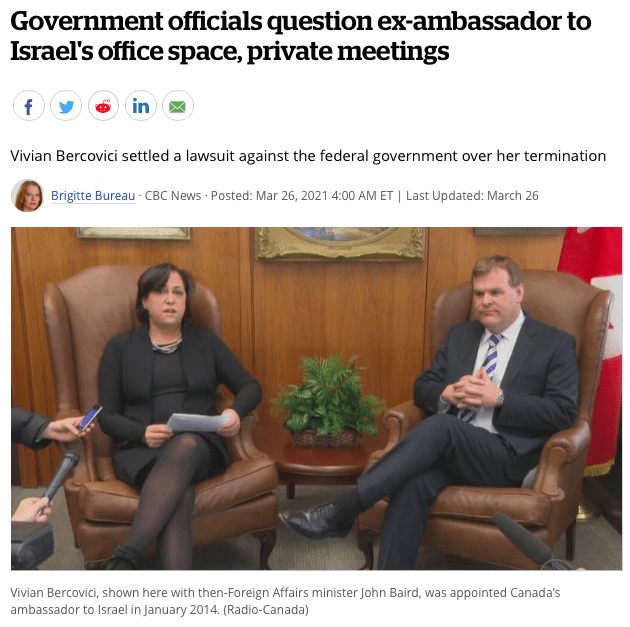 On March 26, CBC News.ca and Radio-Canada.ca both published news reports ostensibly about how six anonymous bureaucrats attempted to smear Canada’s former ambassador to Israel, Vivian Bercovici, claiming she was too close to Israel and complaining that she leased office space outside of Canada’s embassy in Tel Aviv that was reviewed & approved by Global Affairs Canada.

Many felt that this situation bore the hallmarks of an antisemitic conspiracy theory waged against a former Jewish Ambassador due to the bureaucrats alleging that Bercovici had dual loyalties, Israel over Canada, which according to the internationally-recognized IHRA Definition of Antisemitism, is a bona fide antisemitic trope.

Investigative reporter Brigitte Bureau authored the report, of which, Ms. Bercovici could not respond to due to her non-disclosure agreement following the settlement of her lawsuit, according to her lawyer, William McDowell from the Toronto law firm Lenczner Slaght.

“Senior government officials said they often perceived Bercovici as more of a spokesperson for the Israeli government than the ambassador for Canada.”

“What did she convey? What did she reveal to them? They are friends, but still a foreign country.”

What seems entirely lost on the CBC is that the real story was about Canadian bureaucrats who conspired to allegedly slander a former colleague with classic antisemitic tropes in off-the-record interviews with the CBC. Bercovici, it’s important to note, is a former Director of the CBC Board of Directors. Importantly, CBC regards these six sources as confidential sources, not anonymous sources as it knows the identities of these individuals, though the article doesn’t make this explicitly clear.

This begs the question, would CBC grant anonymity to Canadian bureaucrats to engage in anti-Black or anti-Asian hatred, 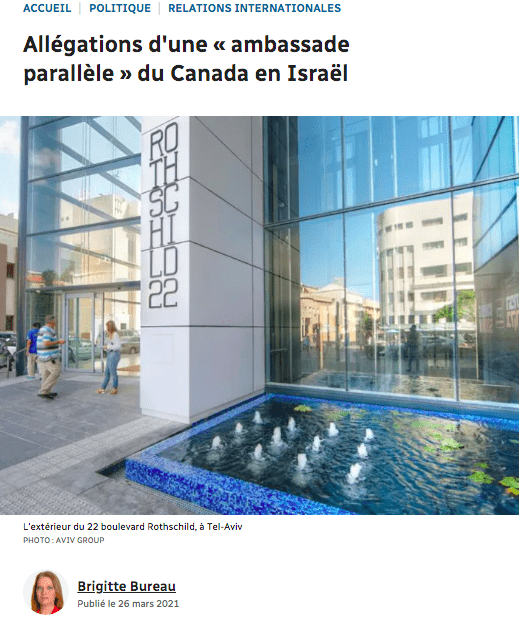 or to engage in racism against members of the First Nations community? It seems very unlikely, but a Jewish Ambassador to Israel seems like low-hanging fruit for our public broadcaster.

Was a double standard at play? And why did CBC give protection to these confidential sources? When John McCallum was removed from China as our ambassador, there was nothing about him being disloyal to Canada during the controversy over his apparent support of Meng Wanzhou, which contradicted the government’s official position on her extradition. Keep in mind that at the time, media reports swirled that McCallum may have dealt privately with the Chinese government, though he strenuously denied being paid by China.

Ultimately, this situation comes down to when it’s warranted to grant anonymity. This article cloaks the identities of individuals who uttered allegedly bigoted comments, unsubstantiated allegations and spurious rumours.

Naturally, these sources don’t want to go on the record because they would be going public with their allegations and bigotry, likely suffering reputational harm and opening themselves up to a lawsuit.

But now that they’ve secured anonymity from the CBC and the mud has been slung against Ms. Bercovici and implicitly to Jews writ large, they’ve achieved their objectives. CBC is complicit to a degree, knowing full well that it’s not going to divulge their sources.

Talk about a miscarriage of justice!