Backgrounder: Hezbollah, The Global Footprint of Lebanon’s Party of God

Hezbollah—Lebanon’s Party of God—is many things. It is one of the dominant political parties i 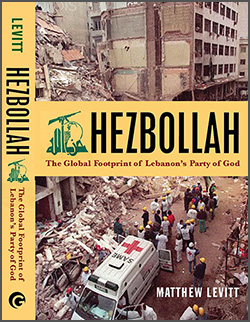 n Lebanon, as well as asocial and religious movement catering first and foremost (though not exclusively) to Lebanon’s Shia community. Hezbollah is also Lebanon’s largest militia, the only one to maintain its weapons and rebrand its armed elements as an “Islamic resistance” in response to the terms of the Taif Accord, which ended Lebanon’s civil war and called for all militias to disarm. While the various wings of the group are intended to complement one another, the reality is often messier. In part, that has to do with compartmentalization of the group’s covert activities. But it is also a factor of the group’s multiple identities—Lebanese, pan-Shia, pro-Iranian—and the group’s multiple and sometimes competing goals tied to these different identities. According to the US Treasury Department, Hezbollah also has an “expansive global network” that “is sending money and operatives to carry out terrorist attacks around the world.”

Hezbollah first made a name for itself in the 1980s with large-scale suicide attacks in Lebanon, including the infamous attack US Marine barracks bombing thirty years ago last month. The lesson both Hezbollah and their sponsor Iran appear to have learned from their early experience is that terrorism works. Hit hard enough, they surmised, and America would pick up and run. Indeed, pointing to the withdrawal of American and French forces from Lebanon in the wake of the Beirut bombings, Osama bin Laden would later come to the same conclusion.

After the 1983 Marine barracks bombing, Hezbollah then expanded its operations further into the Middle East — Kuwait in particular — then Europe. In 1992 and 1994 Hezbollah truck bombs struck in Argentina, first hitting the Israeli embassy and then hitting the AMIA Jewish community center. In 1996, another large-scale attack was successful — this time targeting the Khobar Towers military housing at a base in Saudi Arabia.

The European Union officially designated the “military wing” of Hezbollah as a terrorist organization in July of this year, largely due to the bus bombing in Burgas, Bulgaria that killed five Israelis, the Bulgarian bus driver, and wounded several others and because Hossam Yaacoub, a Lebanese-Swedish dual citizen, was caught surveying Israeli tourists arriving at the airport in Cyprus. In his deposition he admitted he was a member of Hezbollah, but in his words it was “just collecting information about the Jews, and this is what my organization is doing everywhere in the world.” The EU banned Hezbollah’s “military wing” also partly in response to Hezbollah’s escalating role in Syria supporting the Assad regime.

Canada had already banned the entirety of Hezbollah in 2002, describing the organization as “one of the most technically capable terrorist groups in the world.” Hezbollah had been active in Canada since the 1980’s, raising money through criminal activities and charity, procuring dual-use items, and sometimes engaging in potentially preoperational surveillance of principally Jewish or Israeli targets. The group continues to be active, producing false travel documents in Canada, and in a few instances fugitive Hezbollah operatives wanted for their roles in terrorist activities have been found hiding in Canada.

Before his indictment in 2001, a man named Mohamad Hassan Dbouk and his brother-in-law ran the Canadian portion of Hezbollah’s funding and procurement network. The procurement network Dbouk was involved with and other networks in North America primarily focused on smuggling items into Lebanon that would increase Hezbollah’s tactical capabilities on the battlefield. Such items would include night night-vision devices, global positioning systems, computer equipment, and a variety of other items. US Attorney Robert Conrad reported that, “Dbouk is such a major player in the Hezbollah organization that on five separate occasions his application to be a martyr was rejected.” Given his overall intelligence, his military training, and his expertise in information operations, Dbouk was too valuable a commodity to expend on a martyrdom mission.

Today, Hezbollah is bogged down in Syria, where it has taken significant losses, but it has also gone all-in on the side of the Assad regime, to the extent that it sees its own survival wrapped up in the survival of the Assad regime. Now, despite the issues being separate, Hezbollah is also strong supporter of achieving a US-Iran nuclear deal. In a speech delivered in a rare public appearance in Beirut’s Dahiyeh on the eve of the Shiite mourning day of Ashura, Secretary General Hassan Nasrallah stated that “the alternative to an agreement [on Iran’s nuclear program] is a regional war.” Less than a week later, Iran’s embassy was struck in the heart of Hezbollah’s stronghold in Beirut in a double suicide bombing claimed by an al-Qaeda linked Sunni group claiming revenge for Hezbollah’s activities in Syria. With a robust militia, an active global network, a history of violent attacks, and now a series of attacks in Hezbollah’s own territory, Western powers would do well to take Nasrallah’s statement not as an assessment, but a promise.

Matthew Levitt directs the Stein program on Counterterrorism & Intelligence at The Washington Institute for Near East Policy and is the author of Hezbollah: The Global Footprint of Lebanon’s Party of God (Georgetown University Press).

Matthew Levitt
Senior Fellow and Director of The Washington Institute’s Stein Program on Counterterrorism & Intelligence
From 2005 to early 2007, Matthew served as deputy assistant secretary for intelligence and analysis at the U.S. Department of the Treasury and previously had served as a counterterrorism intelligence analyst at the Federal Bureau of Investigation (FBI), where he provided tactical and strategic analytical support for counterterrorism operations, focusing on fundraising and logistical support networks for Middle Eastern terrorist groups. He is the author of Hezbollah: The Global Footprint of Lebanon’s Party of God (Georgetown University Press).