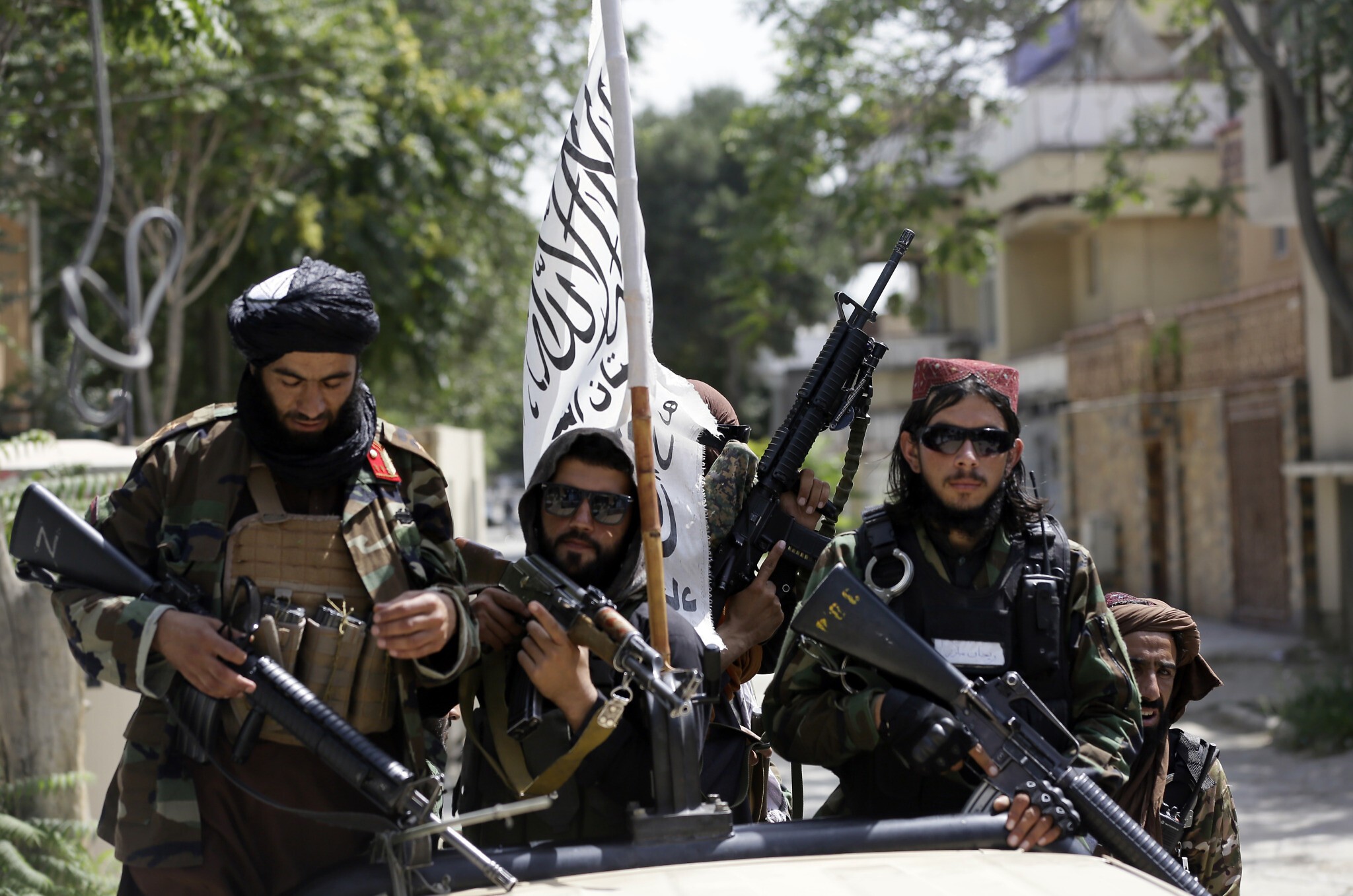 In this Aug. 19, 2021 photo, Taliban fighters display their flag on patrol in Kabul, Afghanistan. Twin tragedies on opposite sides of the world are piling misery on people that have seen far more than their share. In Afghanistan, a group of gunmen known for sadistic tyranny rocketed back into power after 20 years as Western and Afghan leaders walked away with a sad shrug. (AP Photo/Rahmat Gul, File)

The Taliban takeover of all of Afghanistan seems all but assured with the Islamist extremist group recently taking the capital, Kabul.

And while there are discussions taking place around the world, including in Canada, about whether countries should recognize – if at all – the new Taliban dictatorship, these discussions have largely surrounded the question of how foreign governments can support the Afghan people. But what has gone out of sight and out of mind is how widespread recognition of the Taliban could serve to significantly strengthen the regime, rather than serving as an important counter-balance to their extremist agenda.

Fortunately, there are significant parallels which the world can look to in order to understand the impact of appeasement on extremist Islamist terror organizations.

In 1982, in the face of incessant bombings from the Palestine Liberation Organization (PLO), which was using Lebanon as a staging ground for terrorist attacks against Israel, the Jewish State sought to end the violence, by launching Operation Peace for Galilee, which successfully uprooted the PLO. After Israel achieved its intended goals, the Israel Defense Forces withdrew from all of Lebanon, save for a tiny strip of land on the border called the Blue Line.

Hezbollah, an extremist Shia Islamist terror group based in southern Lebanon, had launched violent attacks against Israelis for decades, in an attempt to dislodge Israel, who stayed, recognizing the critical safety that the Blue Line provided.

But Israelis eventually grew tired of the ongoing attacks, and then-Prime Minister Ehud Barak unilaterally withdrew Israeli forces from the Blue Line in 2000, thinking that this would rob Hezbollah of its stated mandate to evict Israel from Lebanon, and would provide a long-standing peace.

That didn’t work. Hezbollah continued pursuing its mission, but greatly expanded its vision from the Lebanese-Israeli border, to destroying all of Israel. In 2006, Hezbollah launched a war with Israel which eventually killed approximately 1,300 Lebanese and 165 Israelis.

Hezbollah’s stance remains the same: “Israel has no legitimacy to exist at all and must be destroyed,” Hezbollah’s leader, Hassan Nasrallah, proclaimed at an Al Quds rally last year to commemorate his group’s ongoing war with Israel.

Five years later, Israel tried the same tactic with the Gaza Strip. The small coastal enclave, despite its rich Jewish history stretching back thousands of years, remained in Egyptian hands until the Six Day War, when it was secured by Israel, which gained it in a defensive battle against Egypt.

By 2005, nearly 10,000 Israeli Jews were living in the Strip, but attacks on them from nearby Palestinian terrorist groups were a regular occurrence, and Israelis were once again growing tired of the ongoing war of attrition.

As a result, in 2005, then-Prime Minister Ariel Sharon led the Unilateral Disengagement, when the Israeli military removed all Israeli civilians and soldiers from the Gaza Strip. “The purpose of the plan,” according to Israel’s ministry of foreign affairs, “was to improve Israel’s security and international status,” absent ongoing peace negotiations with the Palestinians.

Hamas soon turned the entire Strip into their personal terrorist fiefdom. Since then, Hamas has run roughshod over the rights of Gaza’s two million inhabitants, including executing homosexuals, dissidents and preventing women from leaving their homes without a male escort.

In 2000 and 2005, Israel had the best of intentions, to replicate its successful “Land for Peace” deal with Egypt in 1979. But in exchange for giving up land, Israel gave Hezbollah and Hamas an even bigger win: the perception of loss and appeasement.

That is precisely why, years later, most Israelis recognized that disengagement had unintended consequences. Israel made two very difficult decisions, in 2000 and 2005, for the cause of peace, and Israel cannot turn back the clock and re-evaluate those decisions in light of the enormous boost it has provided to Hezbollah and Hamas.

But the rest of the world can learn from Israel’s experiences, and our media should understand that groups like Hamas, Hezbollah or the Taliban think beyond four year election terms, sloganeering, or what will help them win votes. They think long-term, and that means any concession the world makes now – through withdrawal, recognition or other diplomatic gifts – will only serve to benefit these terror groups for many more years to come.