There’s been lots of discussion recently about Israel’s plans in July to apply sovereignty to Judea and Samaria (30% of the “west bank”) and to the Jordan Valley, in accordance with U.S. President Trump’s “Peace to Prosperity” Middle East peace plan.

With governments and various stakeholders each taking out positions, for or against, it was only a matter of time for Canada to wade into the matter with Prime Minister Trudeau publicly condemning Israel’s plans on June 2 in a media scrum and for our journalists to cover Canada’s official position.

In the lead up to P.M. Trudeau’s public opposition to the U.S-Israeli plan, it’s been reported that he privately expressed Canada’s opposition to the plan in calls he had in May with Israeli Prime Minister Netanyahu and Alternate Prime Minister Benny Gantz. (The calls were held to congratulate both leaders for forming Israel’s new government following three inconclusive elections.) 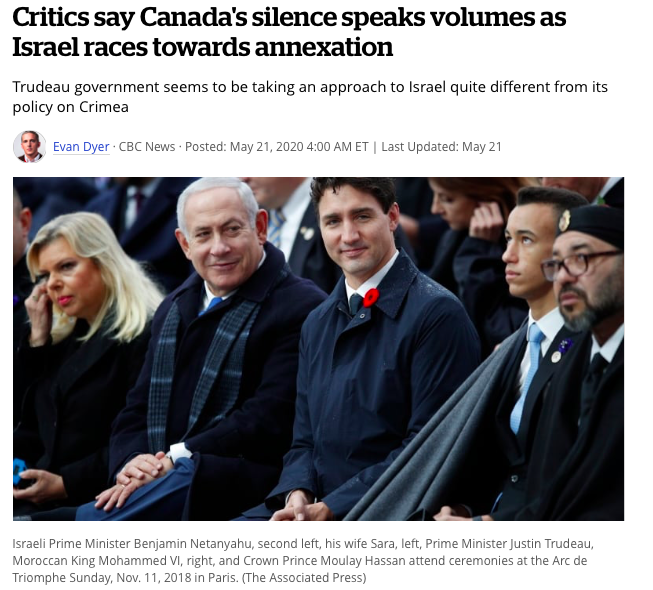 Importantly, nowhere in the article was there any context explaining Israel’s claims to what it refers to as Judea and Samaria (the “west bank”) and why it might want to apply sovereignty to the region (watch this video from the Jerusalem Center for Public Affairs for context). Simply put, the Jewish state plans to apply sovereignty (make the region Israel proper and apply Israeli law) to the Jordan Valley and 30% of Area C territory per the Oslo Accords of Judea and Samaria (“west bank”) per the Trump peace plan and consistent with past U.S. peace proposals that have long understood that Israel will retain these areas in a final peace accord.

Israel says international law enshrines its rights to these lands, while citing pressing security concerns and biblical, historical and political connections to the land. Importantly, a nation cannot “annex” land which it has sovereign claims to. According to international law, these lands were promised to the Jewish people at the San Remo Conference in 1920 which led to the establishment in British-mandate Palestine of a national home for the Jewish people. Israel doesn’t regard the “west bank” as “occupied” because there was no sovereign prior to the defensive Six-Day-War in 1967. Jordan illegally occupied and administered the land from 1948-1967 after Israel’s War of Independence which was waged by pan-Arab armies seeking the nascent State of Israel’s destruction. Jordan didn’t have sovereignty over the land which was ruled under British Mandatory Palestine. As is commonly known, Israel accepted partition and the Arab world rejected it, instead, seeking the Jewish state’s annihilation. With respect to the comparison cited in Mr. Dyer’s article of Russia’s annexation of Crimea, Israel acquired these lands in a defensive war and not an offensive colonial conquest and had preexisting claims to the area where there was no recognized sovereign. Russia was the clear aggressor of Crimea so the comparison falls flat.

HonestReporting Canada was also concerned that there were no sources featured in Mr. Dyer’s article who might explain Israel’s rationale for its sovereignty application and those who perhaps support it. The only sources who Mr. Dyer quoted or referenced were those who are critical of the effort. We only heard opposition from Global Affairs spokesman Adam Austen, Corey Balsam from Independent Jewish Voices, UN Special Rapporteur to the Palestinian territories, Michael Lynk, the NDP’s Jack Harris, the Green Party caucus, a group of former Israel Defense Forces, Daniel Pipes and the Democratic Majority for Israel, who have come out against the plan, along with Mark Mellman, a longtime strategist for the American Israel Public Affairs Committee (AIPAC). No doubt this plan is divisive and there are supporters for and against here in Canada, worldwide and in Israel itself where there’s no monolithic opinion on the topic, but why not at least feature some sources who support the decision, along with an explanation for why they are supportive? Wouldn’t that help CBC readers to better understand this issue?

It was troubling that no Israeli diplomats were quoted (whether here in Canada or from abroad), no American officials were quoted and no Canadian pro-Israel organizations were quoted. Mr. Dyer, if he had wanted to, could have written the exact opposite article by talking exclusively to people who praise the Israeli decision. The article could have been called “Supporters say Canada’s silence speaks volumes as Israel races towards applying sovereignty.”

So again, the two issues we had with this CBC article was that: 1) There was no context about Israel’s claims to the region and its security concerns and 2) there were no sources cited who supported the Israeli effort.

From our perspective and with consideration that this is a very controversial issue about a disputed matter, this article was really quite one-sided, unbalanced and therefore unfair.

HonestReporting Canada communicated these concerns directly to CBC News executives who, to their credit, conveyed our 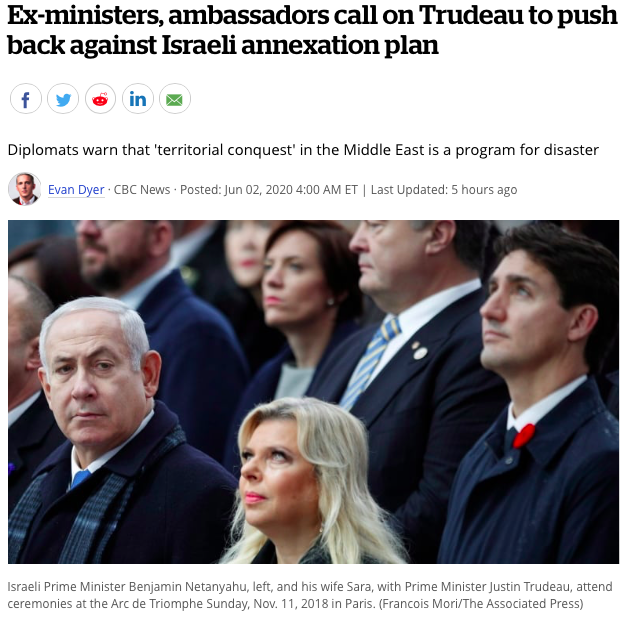 concerns directly to Mr. Dyer. In his subsequent reporting on the issue on June 2, we took note that his reporting now features the context we were seeking which explains Israel’s historical and religious claims to the land, while also acknowledging Israel’s needs for defensible borders along the Jordan Valley. We also appreciate that the article quoted a spokesperson from the Israeli Embassy in Canada on the topic.

Mr. Dyer’s June 2 report was about how: “Four Chretien-era cabinet ministers are among 58 former Canadian diplomats and politicians who added their names to a letter calling on Prime Minister Justin Trudeau and his government to show stronger resistance to a proposed Israeli annexation of a large part of the occupied West Bank.”

Though the CBC’s article is indeed highly critical of Israel, it does include the following context we called for which serves to frame the discussion about the issue sat hand:

Israel, claiming historical and religious links to the land, describes the territories to be annexed as “disputed” rather than occupied, and has implanted a large number of settlements there. It has often argued that Israel needs the Jordan Valley to have more defensible borders in case of war.”

As well, per our request, Mr. Dyer cited a pro-Israel source from the Israeli Embassy in Canada in his article:

Israeli Embassy reacts: The Trump administration has given a green light for the annexation under a Mideast “peace plan” drawn up by President Donald Trump’s son-in-law, Jared Kushner. A joint U.S.-Israeli team has been in Israel and the occupied territories working on an annexation map for several weeks.

Ohad Kaynar, chargé d’affaires at the Embassy of Israel in Canada, told CBC News that “the comprehensive U.S. Peace Plan is the only viable peace initiative currently on the table trying to solve the Israeli-Palestinian conflict. Israel has accepted its foundations, despite concessions which will be required on our behalf. However, the Palestinians have rejected it outright, once again closing the door on any option to negotiate a peaceful future.

“While it is dismaying that diplomats would choose to attack Israel rather than try to facilitate dialogue between the two sides — or at the very least urging the Palestinians to return to direct peace negotiations – Israel will nevertheless remain committed to the U.S. peace plan, in hopes that we eventually find a way to resolve our differences.”

While the Israeli plans to apply sovereignty to Judea and Samaria and the Jordan Valley are divisive, of which, HonestReporting Canada does not take a position as we are a politically neutral organization, at bare minimum, our media must provide context and acknowledge Israel’s rationale so that Canadians understand the issue at hand.