HonestReporting Canada notes that drawing comparisons of contemporary Israeli policy and actions to that of the Nazis fits the European Union’s, U.S. State Department’s, and Canada’s Ottawa Protocol’s working definition of antisemitism. As Deborah Lipstadt, Professor of Modern Jewish and Holocaust Studies at the Institute for Jewish Studies at Emory University noted, comparing “Jews to Nazis is not only ill-informed, it demonstrates a certain prejudice – anti-Semitism – which will never help resolve the situation. Whatever one thinks of Israeli policy, to describe it as akin to the Nazi policy of murdering all of European Jewry is to engage in anti-Semitism and a form of Holocaust denial.”

The full report can be viewed here or appended below: 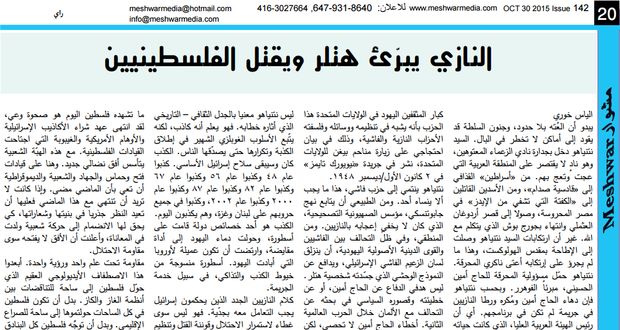 In his article, Khouri accuses Netanyahu of belonging to a “fascist party” and of following the “path of [Ze’ev] Jabotinsky” who “did not conceal his fascination of the Nazis.”

He added,“In light of the alliance between the fascists and the fundamentalist religious Jewish groups, the slip of tongue made by the Israeli fascist leader is reasonable, as he defends the brutal model embodied in Hitler personality.”

Khouri, who argued that “those in power in Israel are the neo-Nazis,” went on to say that “lying is one of the characteristics of the state that was built on a myth, made the blood of the Jews a bargaining tool and consented to become a puppet for Europe, which wiped out the Jews.”

He expressed support of the current Palestinian flare-up (also dubbed as al-Quds or the Knife Intifada). “A new horizon of struggle is being established by the popular flare-up. The leadership of Fatah, Hamas, the [Islamic] Jihad, PFLP and DFLP must understand that the past is gone… and join the popular movement that was born out of suffering and declared that only the fighting the occupation will open up the horizon. Fighting under one flag and one vision…”

“The popular flare-up is not just a reaction to the actions of the occupation in al-Quds, but an action that is capable of bringing about an achievement in al-Quds [Jerusalem] without ending the flare-up. The achievement will be a prelude to consequent flare-ups that will strive to expel the occupation unconditionally.”

In 2014, The Centre for Israel and Jewish Affairs (CIJA) submitted to Peel Region Police several complaints of possible hate crimes allegedly committed by Meshwar newspaper. The complaints documented cases of anti Jewish rhetoric including sympathizing with a terrorist attack (Jerusalem massacre), posting an article questioning the veracity of the Holocaust and a cartoon that depicted the Israeli Prime Minister Benjamin Netanyahu drinking the blood of Palestinian children.