Israel Is An Imperfect Country, But A Vibrant...
Why Are Anti-Israel Activists So Afraid of The...
McGill Tribune Publishes Op-Ed Calling for a Boycott...
Ontario Arabic Paper’s Editor Downplays Holocaust; Meshwar Describes...
How the War in Ukraine is Having a...
Toronto Star Columnist Shree Paradkar Wrongly Claims IHRA...
After Vancouver Adopts IHRA, CBC Radio Interviews Fringe...
Qatar Prepares For The 2022 World Cup: Will...
Lawfare: Who is Using the Law More Effectively?...
Official Publication of the College of Physicians and...
Home Media Action Alerts2022 Anti-Israel Organization at McGill University Suspended For 105 Days By Student Government 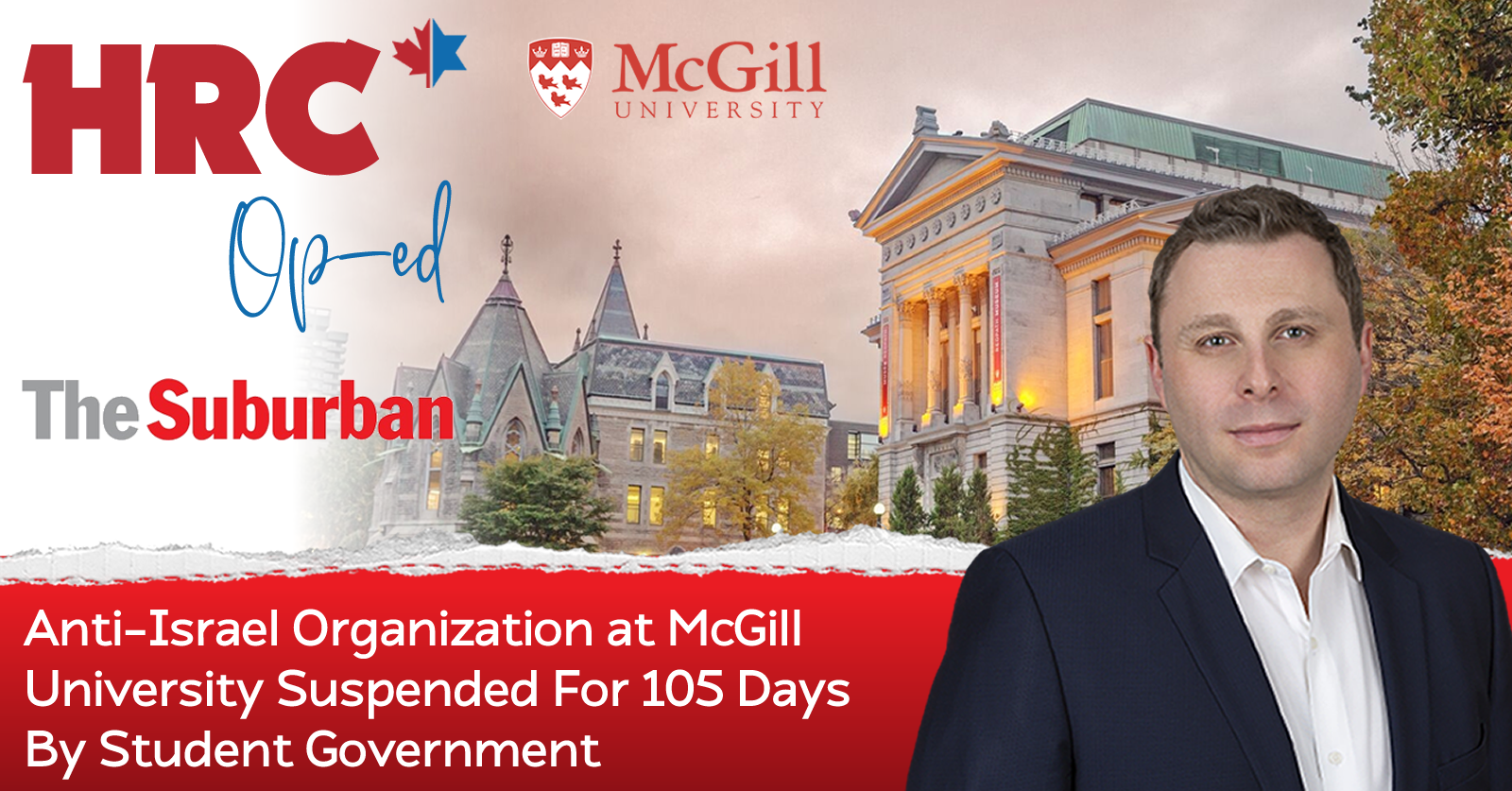 One anti-Israel organization at McGill University is providing some comical relief this summer, but not for the reason they intended.

As published in The McGill Tribune on June 12, following the March 21 referendum vote, in which a Palestine Solidarity Policy was approved by a small number of voting students, the Students’ Society of McGill University (SSMU) refused to ratify the new policy, recognizing it as violating the university’s policies. The policy would have mandated the student government to adopt a vocal anti-Israel stance.

In response, Solidarity for Palestinian Human Rights (SPHR) McGill, which backed the anti-Israel referendum, decided to publish an amateurish parody article, mocking the university’s student government for refusing to back their policy.

In the satirical article, published to social media, SPHR McGill penned an opinion article mocking SSMU’s refusal to formalize the anti-Israel referendum. The article, satirically written from the SSMU leadership “Board of Dictators,” referred to themselves as having backbones “made of jelly” and that “crushing student democracy is meant to be…fun.”

The parody article, while presumably meant to be humourous, was poorly and sloppily written.

In fact, perhaps the only comical passage in the otherwise decidedly unfunny parody article is when SPHR McGill – writing as the student government – referred to the referendum which passed the Palestine Solidarity Policy as having an “overwhelmingly… democratic mandate.” 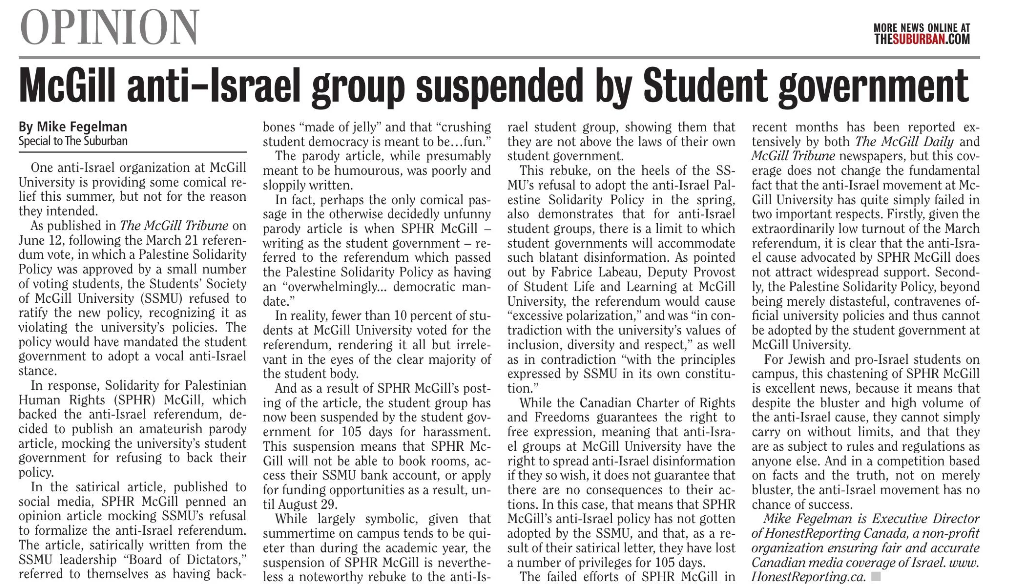 The published version of Executive Director, Mike Fegelman’s Op-Ed from The Suburban

In reality, fewer than 10 percent of students at McGill University voted for the referendum, rendering it all but irrelevant in the eyes of the clear majority of the student body.

And as a result of SPHR McGill’s posting of the article, the student group has now been suspended by the student government for 105 days for harassment. This suspension means that SPHR McGill will not be able to book rooms, access their SSMU bank account, or apply for funding opportunities as a result, until August 29.

While largely symbolic, given that summertime on campus tends to be quieter than during the academic year, the suspension of SPHR McGill is nevertheless a noteworthy rebuke to the anti-Israel student group, showing them that they are not above the laws of their own student government.

This rebuke, on the heels of the SSMU’s refusal to adopt the anti-Israel Palestine Solidarity Policy in the Spring, also demonstrates that for anti-Israel student groups, there is a limit to which student governments will accommodate such blatant disinformation. As pointed out by Fabrice Labeau, Deputy Provost of Student Life and Learning at McGill University, the referendum would cause “excessive polarization,” and were “in contradiction with the university’s values of inclusion, diversity and respect,” as well as in contradiction “with the principles expressed by SSMU in its own constitution.”

While the Canadian Charter of Rights and Freedoms guarantees the right to free expression, meaning that anti-Israel groups at McGill University have the right to spread anti-Israel disinformation if they so wish, it does not guarantee that there are no consequences to their actions. In this case, that means that SPHR McGill’s anti-Israel policy has not gotten adopted by the SSMU, and that, as a result of their satirical letter, they have lost a number of privileges for 105 days.

The failed efforts of SPHR McGill in recent months has been reported extensively by both The McGill Daily and McGill Tribune newspapers, but this coverage does not change the fundamental fact that the anti-Israel movement at McGill University has quite simply failed in two important respects. Firstly, given the extraordinarily low turnout of the March referendum, it is clear that the anti-Israel cause advocated by SPHR McGill does not attract widespread support. Secondly, the Palestine Solidarity Policy, beyond being merely distasteful, contravenes official university policies and thus cannot be adopted by the student government at McGill University.

For Jewish and pro-Israel students on campus, this chastening of SPHR McGill is excellent news, because it means that despite the bluster and high volume of the anti-Israel cause, they cannot simply carry on without limits, and that they are as subject to rules and regulations as anyone else. And in a competition based on facts and the truth, not on merely bluster, the anti-Israel movement has no chance of success.