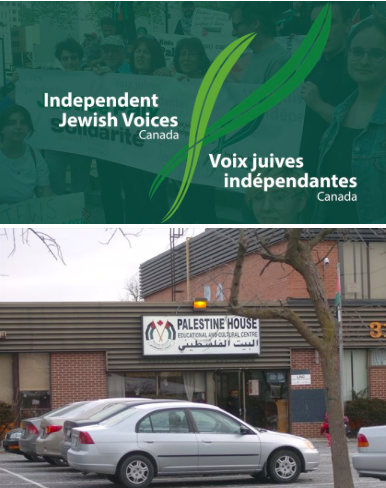 From time to time, Canadian media outlets quote representatives from a fringe anti-Israel group known as Independent Jewish Voices (IJV). Aside from being not representative of mainstream Jewish Canadian groups, IJV has been criticized for being against the very existence of the world’s only Jewish state and according to IHRA, their supporting anti-Zionism and their denying the Jewish state’s self determination, is tantamount to antisemitism, as is their support for the BDS Movement.

According to Richard Marceau of CIJA: “IJV opposes the two-state solution. IJV supports Israel Apartheid Week on Canadian campuses. IJV supports the Boycott, Divestment and Sanctions (BDS) campaign against Israel (and only against Israel). IJV is aligned with extremist groups like the Canadian Arab Federation and Tadamon. IJV marched in demonstrations alongside activists yelling “Jews are our dogs,” and stood shoulder to shoulder with protesters carrying Khomeini placards at an anti-Israel rally instigated by the Islamic Republic of Iran.”

We took note that a recent IJV release on March 6 which voiced opposition against Bill 168 which would see the Province of Ontario adopt the IHRA definition of antisemitism in order to combat Jew hatred, that IJV joined forces and made common cause with the anti-Israel group Palestine House to lobby against Ontario’s adoption of IHRA.

For those not familiar with Palestine House, in 2012, the organization lost its government funding due to its alleged support for extremism. At the time, then Minister of Citizenship, Immigration and Multiculturalism, Jason Kenney, withdrew future funding to Palestine House claiming the group had alligned itself with extremist causes.

If we are to judge someone by the company they keep, here we have IJV standing in alliance with the extremists at Palestine House. Canadian media take note.