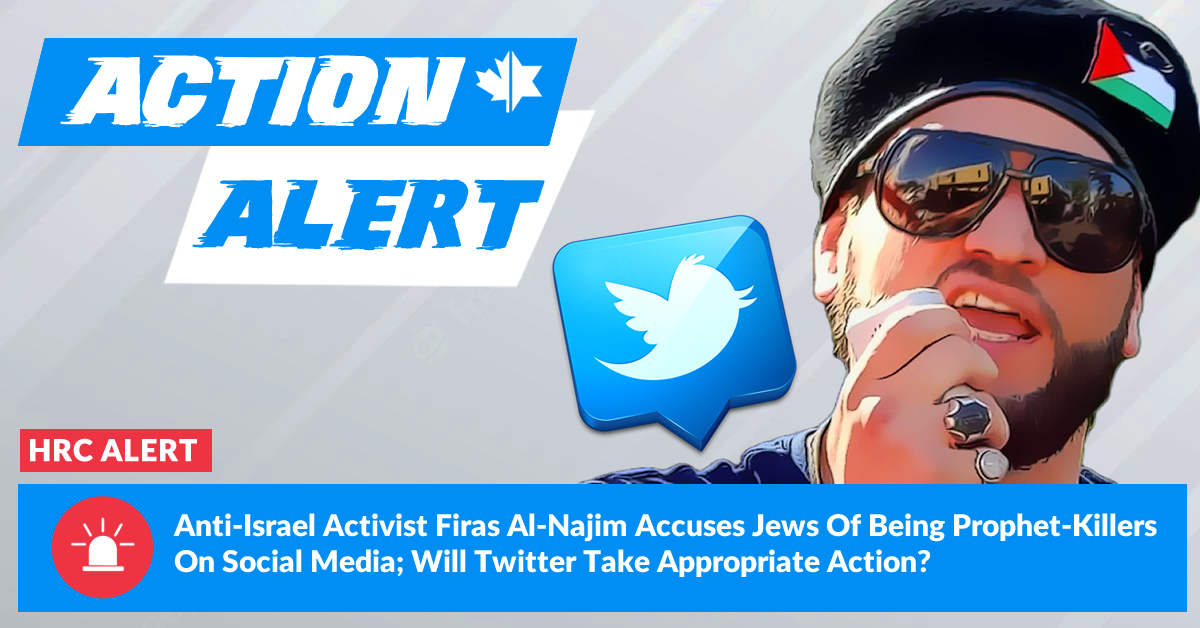 Firas al-Najim is the founder of the organization Canadian Defenders for Human Rights (CD4HR), a non-profit group which claims to work “tirelessly to defend the rights of humans of all backgrounds, colours, and faiths.”

But al-Najim has a sordid history of attacking Israel and the Jewish community in general and is an outspoken advocate of the Iranian regime.

Al-Najim has accused “Zionists” of blackmailing Canadian news outlets into supporting Israel, has disgracefully verbally assaulted a Holocaust survivor at a Jewish event, and on Canada Day, along with a small group of supporters, accosted shoppers at an Israeli store in Thornhill, Ontario, before police arrived and sent him away.

Despite his amateurish tactics, al-Najim has amassed a fairly substantial following on social media. On his TikTok account earlier in 2022, al-Najim posted a video accusing Israel of committing genocide against Palestinians by claiming that a “Palestinian Holocaust that is happening every minute and every hour inside the holy occupied land of Palestine that they call Israel” and that “antisemitism is a fraudulent card being used and abused by Zionists to justify occupation.”

Fortunately, following HonestReporting Canada’s alert, al-Najim’s TikTok account – which at the time had 8,281 followers – was removed from the social media platform.

However, his absence from TikTok has not stopped him from spewing antisemitic content elsewhere.

And a reminder, this is the same Firas al-Najim who was accused of nearly-ramming his car at Canadian protesters against oppression in Iran a couple months ago. Subsequently, al-Najim was charged with dangerous operation of a motor vehicle, flight from police and a dangerous weapons charge. This is the same Firas al-Najim who in a 2018 commentary in Sada AlMashrek, a Montreal-area Arabic newspaper, claimed that Palestinians in Gaza “live under a concentration-camp lifestyle.” Importantly, the International Holocaust Remembrance Alliance (IHRA) says that: “Drawing comparisons of contemporary Israeli policy to that of the Nazis” is antisemitism. In other words, accusing Israel of carrying out a Palestinian “Holocaust” is Jew hatred, plain and simple.

Meanwhile, al-Najim’s personal account on Twitter is an active cesspool of posts accusing Israel, Jews and “Zionists” of crimes, including killing of religious prophets.

In one post on Christmas Day, al-Najim responded to Christmas greetings from Israeli Prime Minister Benjamin Netanyahu, and stated that “your great grandfathers” were “involved in trying to crucify (the) Prophet #Jesus.”

Only a few days earlier, on December 20, al-Najim posted a photo of Netanyahu and his family with a Chanukkah menorah, and doctored the photo with the words “The wicked family” and “The inheritors of the killers of the prophets.”

These are hardly isolated examples of al-Najim accusing Jews of being prophet-murderers.

Twice in November and again in early December, al-Najim referred to Jews as “inheritors of the killers of the prophets.”

This claim – of Jews being killers of the prophets – may not be as well-known in contemporary times, but it is a lie with a bloody past.

Historically, Jews have been accused of deicide, and collectively held responsible for the death of Jesus, and during the Crusades, this claim was used as a cudgel against the Jews, helping to spur on widespread persecution and murders.

But accusations of Jews being prophet-killers did not end hundreds of years ago. Louis Farrakhan, leader of the Nation of Islam (NOI), has repeatedly and emphatically borrowed this imagery with his followers.

The baseless and hateful accusation of Jews being prophet-killers has a long and bloody history, and has proven to be a stubbornly resilient claim in antisemitic corners.

Precisely for this reason, the IHRA has cited this claim as a helpful example in identifying contemporary antisemitism.

IHRA’s working definition of antisemitism, which has been adopted by dozens of countries, including Canada, and a number of Canadian provinces, also states that “Using the symbols and images associated with classic antisemitism (e.g., claims of Jews killing Jesus or blood libel) to characterize Israel or Israelis” is antisemitic.

IHRA’s definition also identifies “Accusing Jews as a people of being responsible for real or imagined wrongdoing committed by a single Jewish person or group, or even for acts committed by non-Jews” as a contemporary example of antisemitism, clearly exemplified in al-Najim’s posts on Twitter.

While there is no rhyme or reason to antisemitic canards used either in antiquity or contemporary society, the claim of killing prophets has arguably been used to justify some of the bloodiest massacres ever forced upon the Jewish people, and by repeating it, al-Najim is spreading hateful and dangerous antisemitic propaganda.

While al-Najim’s fewer than 1,300 Twitter followers may seem low, some of his posts have attracted thousands of views, including one where he called for Israel’s destruction, sharing a New Year’s wish with followers for a “#FreePalestine and #endofisrael.”

Regardless of the size of his audience, al-Najim’s Twitter account is rife with anti-Jewish statements, including ones where he accuses Jews of being prophet-killers.

To report Firas al-Najim’s Twitter account for hateful conduct please report the following tweets by following the instructions in the images below: 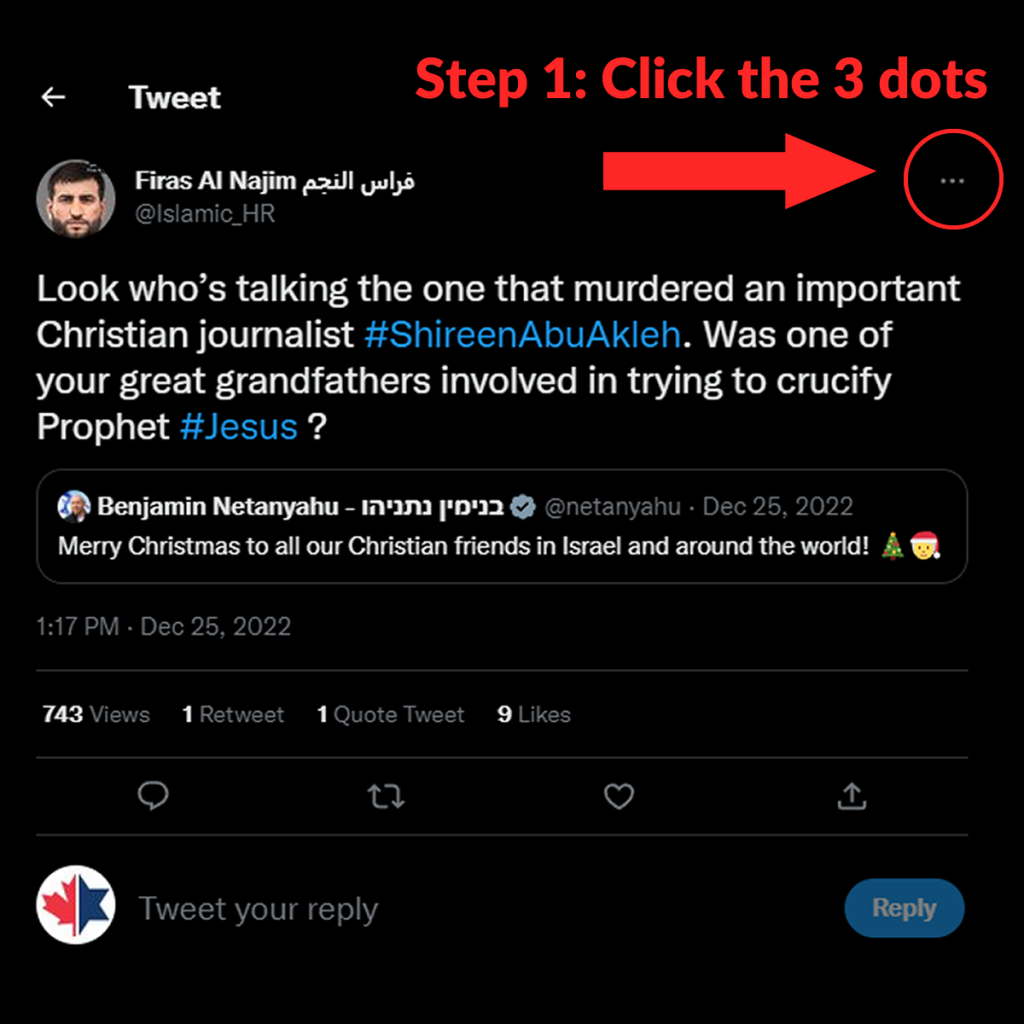 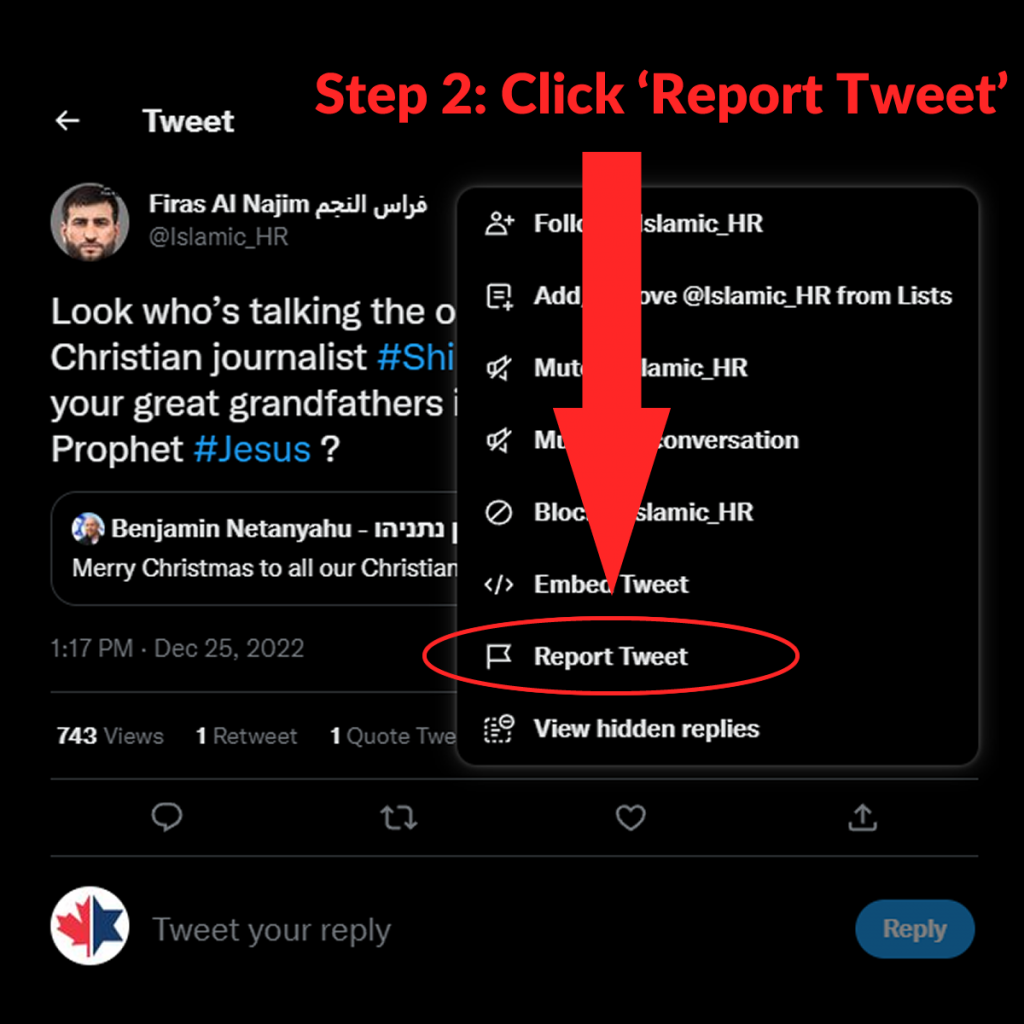 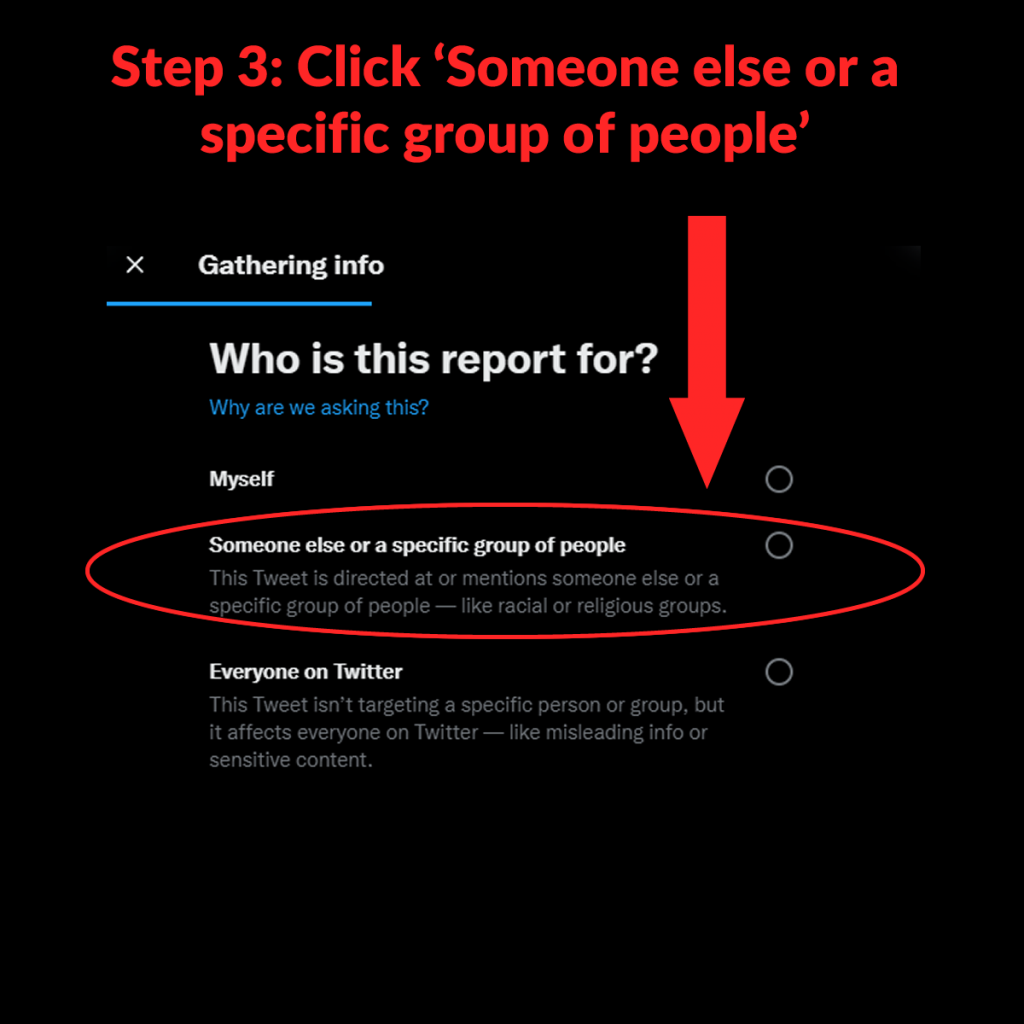 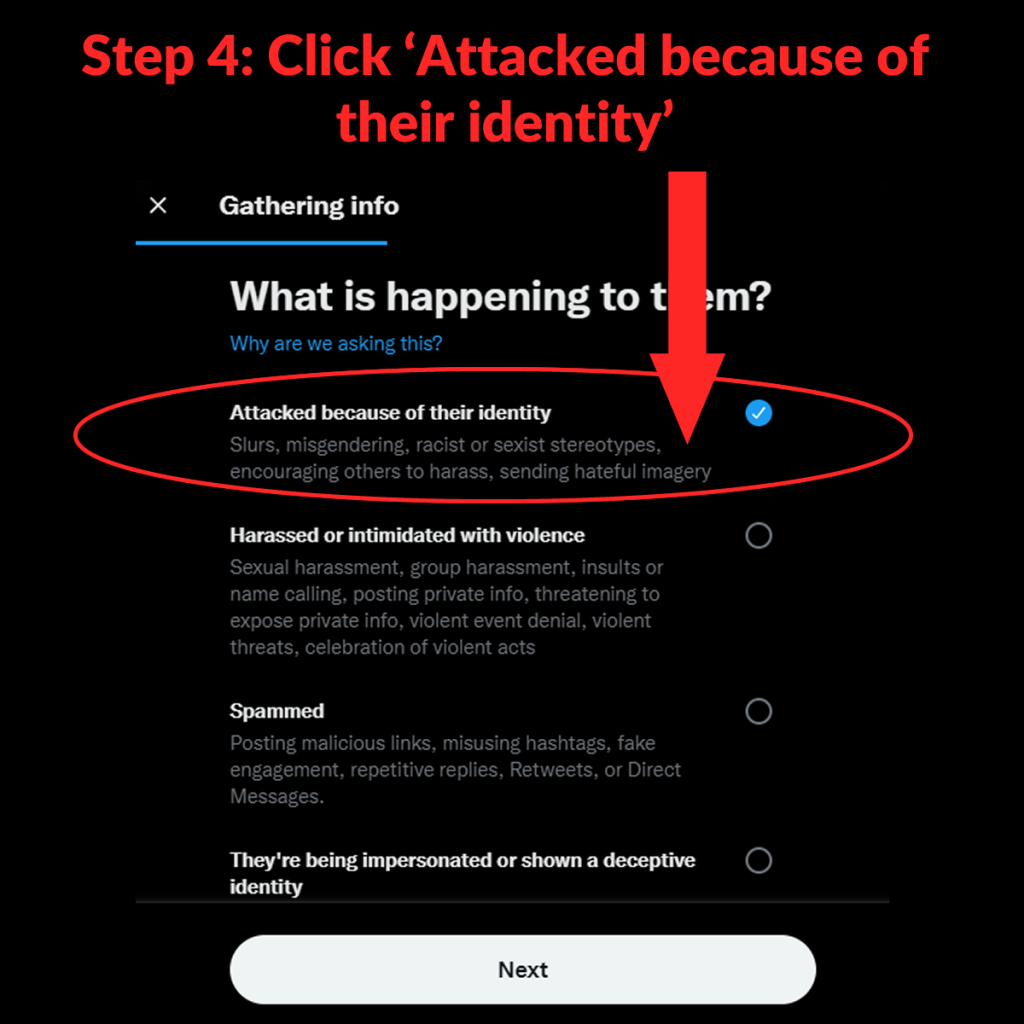 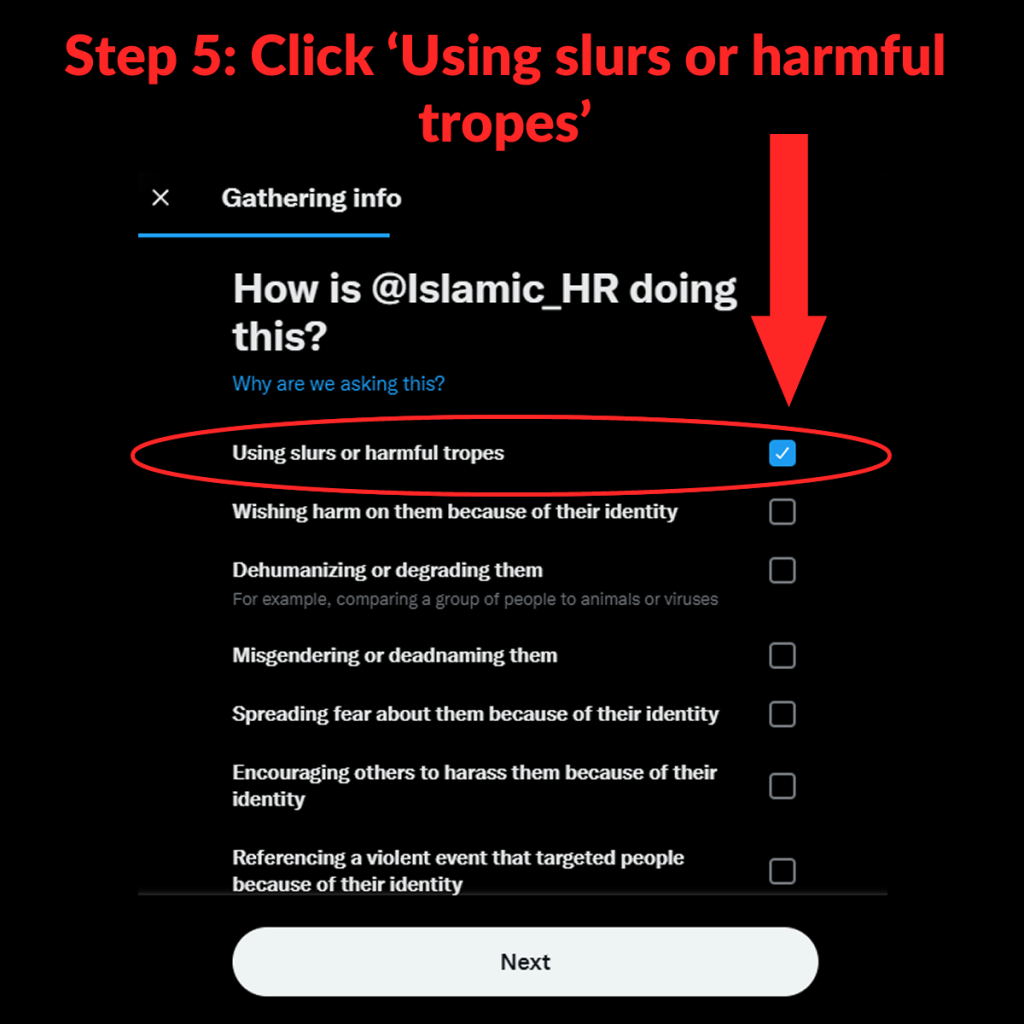 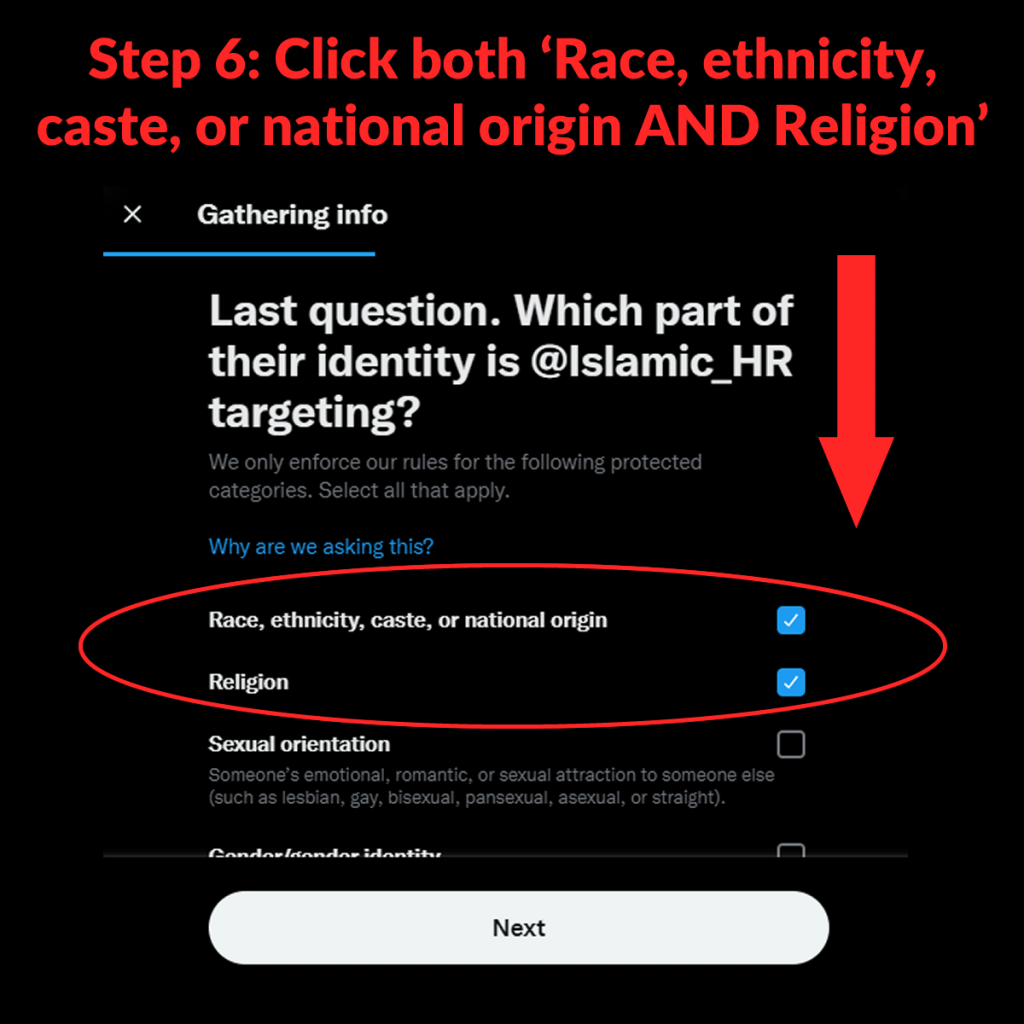 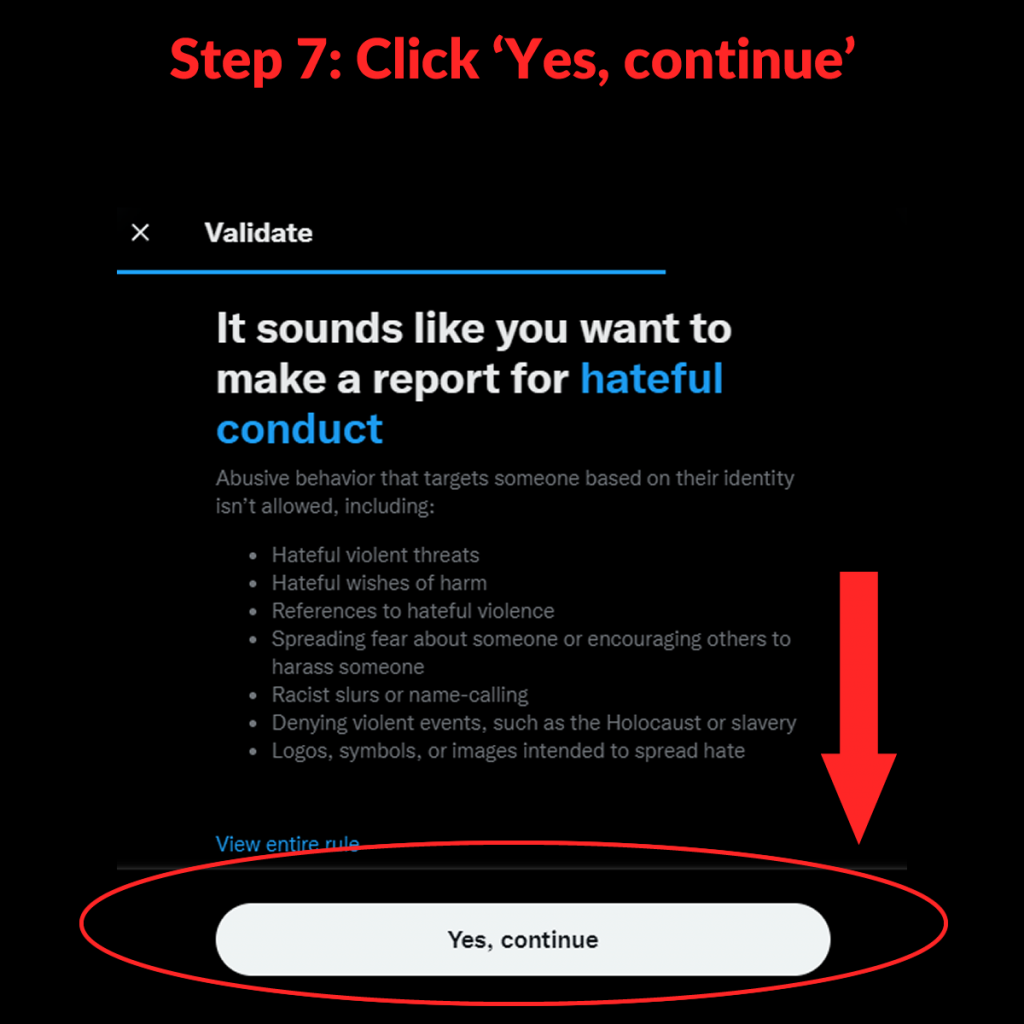 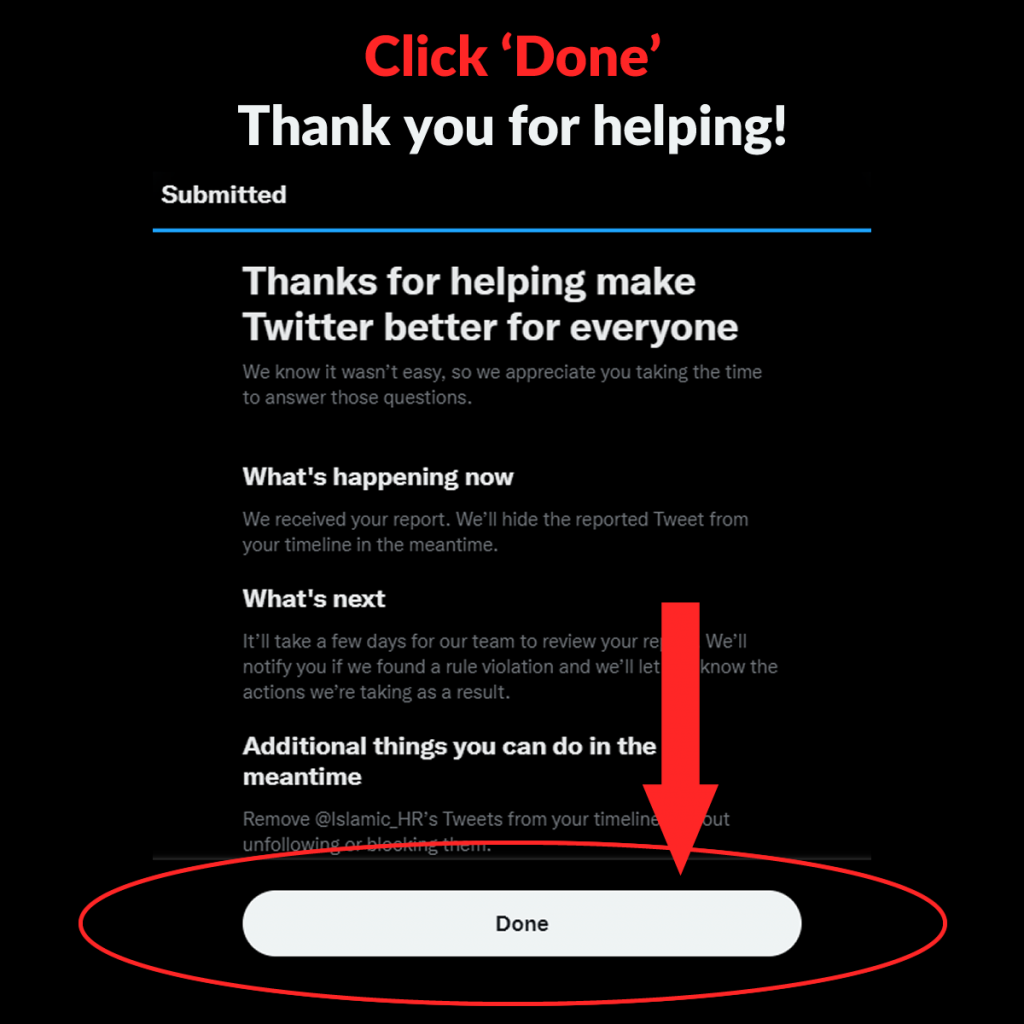