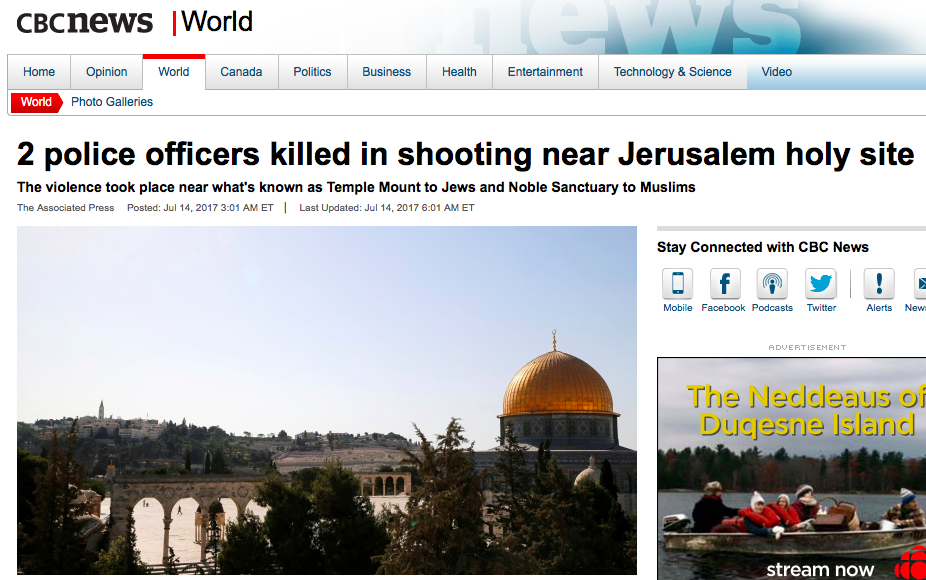 An attack of this nature, which saw three armed terrorists infiltrate with automatic weapons from a revered holy site to both Jews and Muslims alike, was unprecedented. Naturally, this incident commanded considerable media coverage here in Canada.

While the National Post and CTV News both made sure to identify the assailants in their headlines, CBC News, the Toronto Star, and the Globe and Mail omitted mentioning this important context and information in their headlines:

Importantly, readers see headlines 3:1 over the adjacent article and some readers who don’t see the corresponding article, could wrongly conclude that the incident in question could have been crime related and not a terror attack. That, and as social media sharing traditionally recirculates headlines only.

As we now know and as was reported by the Times of Israel, “One of the three men who carried out a deadly terror attack Friday morning at the Temple Mount posted on Facebook shortly before the shooting, saying ‘Tomorrow’s smile will be more beautiful, God willing.’” Even Palestinian President Mahmoud Abbas condemned the attack.

Headlines aside, CBC News did issue a correction after HRC liaised with CBC editors to note that the attackers were Arab-Israelis:

Another material error made by the CBC was broadcast on CBC Radio’s World Report program and CBC TV’s News Now program on July 14 in reports by freelancer Irris Makler.

In reporting on the terror attack, Ms. Makler erroneously reported the following:

“They opened fire at Israeli border police, after that, they ran into the compound of the Al Aqsa Mosque.  A shootout between the gunmen and Israeli police followed inside the mosque, captured on Palestinian cell phones. It shows one of the gunmen being shot and killed there…”
(CBC World Report at 9:00am EST – listen by clicking here)

“They came from out of the Al Aqsa Mosque and then they shot near the Lion’s Gate and killed two Israeli border police, they then ran back into the mosque and they were shot. So what we saw was the extraordinary site, three unusual things: 1) a shootout inside the Al Aqsa Mosque (that in itself is almost unprecedented) then we saw that after that, there was the closure of the mosque. First of all, there was the discovery that these 3 men were not Palestinians, but were actually Arabs from Israel…”
(CBC News Now at 11:23am EST – listen by clicking here)

Contrary to what Ms. Makler reported, the shootout occurred outside in the Temple Mount compound, there was no shootout between the Arab-Israeli terrorist gunmen and Israeli police “inside the mosque,” which is a very sensitive holy site.

To confirm the veracity of this information, please see this Times of Israel report which states that: “Just after 7:00 a.m. on Friday, the three terrorists opened fire on a group of police officers, standing just outside the Temple Mount compound. Two of them were hit and seriously wounded. A third officer was struck by shrapnel and suffered light injuries. The two seriously wounded officers were treated by medics from the Magen David Adom ambulance service and taken to Jerusalem’s Hadassah Hospital Mount Scopus, where they were pronounced dead. The third officer was taken to the capital’s Shaare Zedek Medical Center for treatment. The three terrorists behind the attack were shot dead by other police officers on the scene, a police spokesperson said.”

The attack occurred near Lion’s Gate according to the Jerusalem Post. The Post also reported that: “The assailants fled to the Temple Mount where they were killed by police officers.” Footage of the attack can be seen here.

In conclusion, this serious terror attack did receive coverage in many Canadian media outlets. Some coverage was good, while many reports were jaundiced, abbreviated, lacked context and were therefore incomplete.