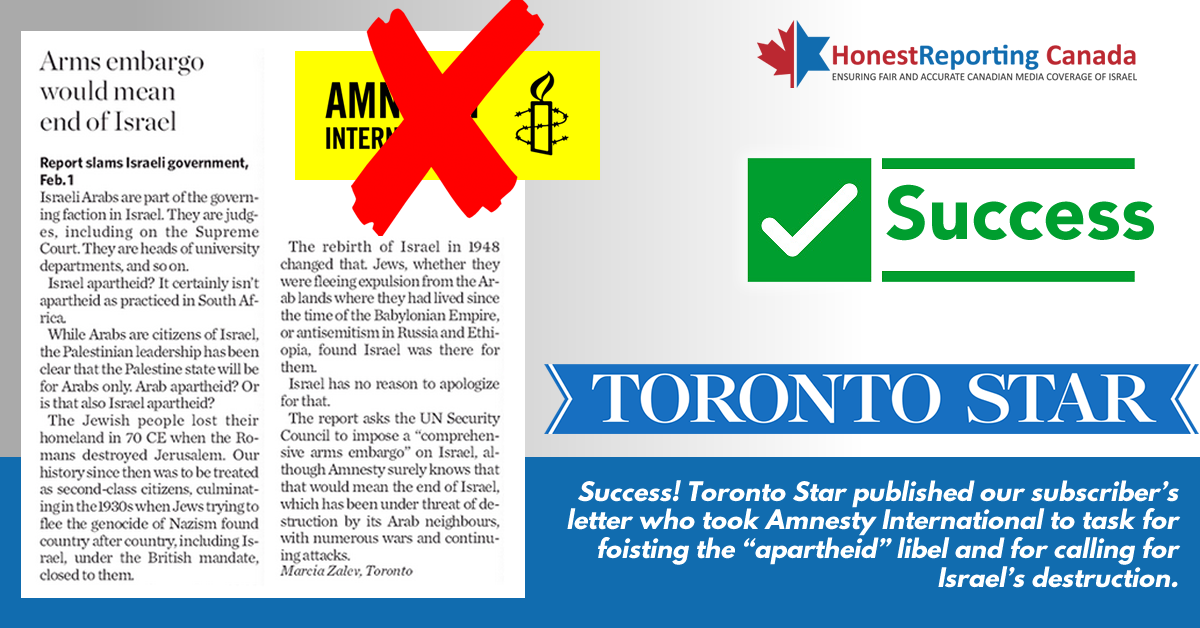 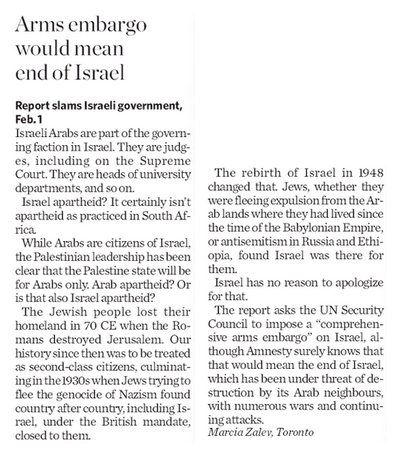 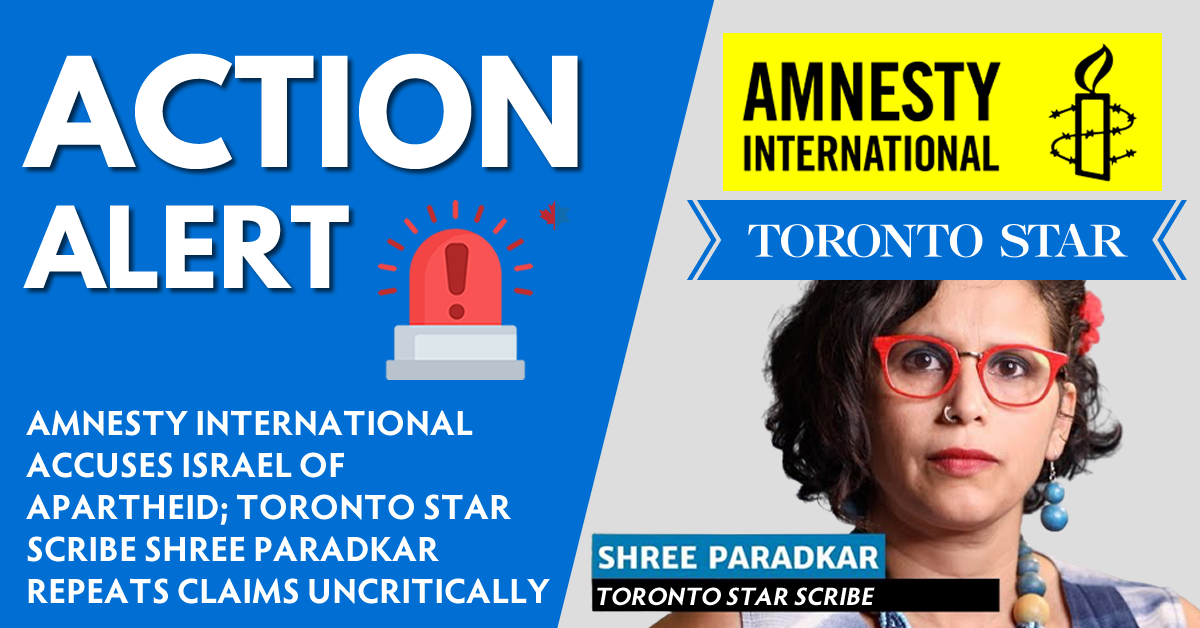 On February 1, Amnesty International, an organization which has shown a consistent anti-Israel obsession in recent years, released a report accusing Israel of apartheid.

Amnesty’s well known for its anti-Israel animus and has been discredited due to its faulty methodology and politicized smear campaigns. This latest report is far from a surprise and has been described as an effort that demonizes Israel, that denies the Jewish state’s right to exist and that is antisemitic.

Paradkar discussed at length the report’s details about the alleged crimes of Israel’s security measures in Judea and Samaria (the “West Bank”), but gave no context, examples or statistics to demonstrate how, for example, the security barrier erected by Israel has resulted in a dramatic drop in the number of Palestinian terrorists entering Israel intent on maiming and murdering Israelis.

But despite the claim of “apartheid” lobbed by Amnesty International, there is no evidence to buttress the allegation that Israel is an apartheid state, and in fact, significant evidence exists demonstrating that Israel is the polar opposite of how its detractors depict it.

Under apartheid South Africa, interracial marriages were against the law, and Blacks were forced to live in specific neighbourhoods and suffered manifold abuses to their civil liberties.

Does this resemble Israel at all?

Israel is a liberal democracy of nearly 9.5 million people, of which roughly 2.5 million are Arabs (predominantly Muslim, Christian, and Druze). These 2.5 million Israeli Arabs enjoy full civil and democratic rights, including the right to vote and to be elected to political office. Israeli Arabs – who sometimes identify themselves as Palestinians – can live anywhere they want, hold any job they want, and travel freely through the country with just as many freedoms as their Jewish neighbours. In the eyes of Israeli law, all Israeli citizens regardless of religion or ethnicity are fully equal.

For many years, Arabs have been represented in Israel’s Knesset, or federal parliament, but in Israel’s 2021 election, Ra’am, an Arab Islamist political party led by Mansour Abbas, was elected to Israel’s coalition government. Such an event would have simply been inconceivable in Apartheid South Africa. Blacks could not vote, could not hold political office, and certainly could not serve in the government itself.

The rights of Israeli Arabs are so comprehensive and protected, that to accuse Israel of apartheid is simply misinformation and libel.

Keep in mind, Israel is a country where an Arab Supreme Court judge sent a Jewish President of Israel to jail. Israel is the only liberal democracy in the Middle East where its 20% Arab minority enjoys full equal rights before and under the law. Israeli Arabs consistently affirm they would rather live in Israel as a minority than anywhere else in the Middle East as part of the majority. Israel’s vibrancy, its openness, and tolerance have solidified its credentials as a progressive liberal democracy whose Arab minority not only enjoys the same rights as all other Israeli citizens, they occupy positions at the pinnacle of Israeli society. Arabs have been elected to Israel’s parliament, they fight in the Israel Defense Forces and partake in every facet of Israeli society. Amnesty International and Shree Paradkar employ this empty rhetoric solely to demonize Israel. 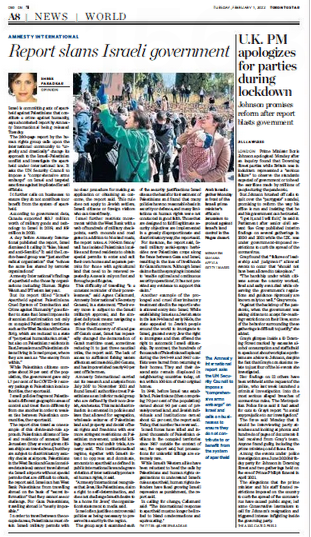 Where’s Amnesty’s 200-page report on Syria’s massacring half a million of its citizens or on Hamas and the Palestinian Authority’s terrorism, incitement, corruption, anti-democratic credentials, oppression, and other human rights violations? Inquiring minds want to know.

In its report, Amnesty International also accused Israel of practicing apartheid against Palestinians who live in the Gaza Strip, and under control of the Palestinian Authority (PA) in the “West Bank”. This allegation is also patently false, but for different reasons.

Palestinians who live in both Gaza and under the Palestinian Authority are not Israeli citizens, do not pay Israeli taxes, and are not beholden to Israeli civil law.

In 2005, Israel forcibly removed all of its civilians and soldiers from Gaza, some of whom had lived there for generations, in an attempt at peace. The enclave is entirely disassociated with Israel, which neither occupies nor controls a square inch of the land.

In 2007, Hamas, the Islamist terrorist group, waged a civil war against its rival Fatah and seized control of Gaza. Therefore, not only is Israel not in control of Gaza, but a separate, independent Palestinian movement has full control over the roughly two million Palestinians who live there.

In the “West Bank”, the large majority of Palestinians live under the civil and security control of the Palestinian Authority, the successor to the Palestine Liberation Organization (PLO), which was founded in 1964 by Yasser Arafat.

Israel has not legally annexed Judea & Samaria, and the Palestinians who live there live under the civil control of the PA, not Israel. Furthermore, Israel has made repeated peace offers to the Palestinian Authority, most notably at Camp David in 2000, when Israeli Prime Minister Ehud Barak offered then-PA Chairman Yasser Arafat the entirety of the Gaza Strip, eastern Jerusalem, and virtually all of Judea & Samaria, as an independent Palestinian state. The offer was rejected in favour of a violent uprising, or intifada.

The last apartheid claim is that Israel’s system of checkpoints in Judea & Samaria effectively means that Palestinians do not enjoy unfettered freedom to travel. However, these checkpoints are necessary security measures to prevent suicide bombers and other malicious actors from entering Israel, and murdering innocent civilians. Had the Palestinian leadership accepted Israel’s previous offer of peace, it would have meant an end to the conflict, and a likely end to the checkpoints.

As pointed out by Professor Eugene Kontorovich, an expert in International Law at George Mason University, it is the PA, not Israel, which is an active apartheid regime, “where it is impossible for Jews to live in its jurisdiction, and actively campaigns for the expulsion of all Jews from the West Bank.”

Amnesty International’s “apartheid” smear against Israel is agenda-driven misinformation cloaked in the language of human rights to deny the Jewish state’s right to exist and Shree Paradkar’s context-less report only serves to obfuscate the truth further and protract the Israeli-Palestinian conflict.


Send a letter to the Toronto Star now to voice your concerns with Paradkar’s demonizing Israel by her parroting Amnesty International’s “apartheid” slur. Send letters to: lettertoed@thestar.ca and Tweet @TorontoStar and @ShreeParadkar.