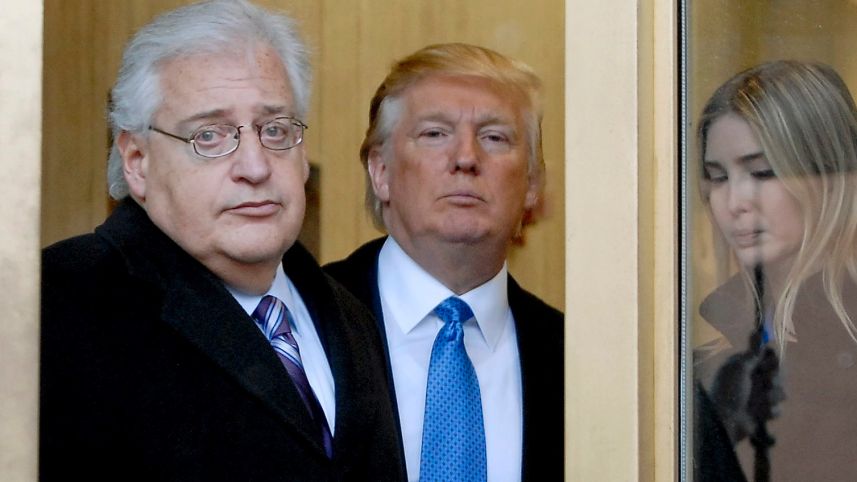 President-Elect Donald Trump’s appointment of David Friedman (pictured right) to serve as new U.S. Ambassador to Israel has been met with lots of news coverage in the mainstream media, much of it was myopic and was rife with hysteria, hyperbole, and doom & gloom scenarios.

Instead of informing listeners that many international Jewish organizations and Israeli politicians support his appointment, true to form, media outlets like the CBC cast his appointment as one which was met exclusively with derision.

On the evening of December 16, CBC Radio’s “World at Six” flagship program broadcast a report by Tom Parry which was unfair and one-sided in its depiction of Friedman’s appointment.

To listen to Tom Parry’s report please click here or on the image below.

Introducing Tom Parry’s report, the CBC’s anchor stated the following: “U.S. President-elect Donald Trump is coming under fire over his choice for a new U.S. Ambassador to Israel. Trump has nominated David Friedman to take up the position. Friedman is a staunch supporter of the Israeli settler movement that has caused bitter conflicts with the Palestinians.”

Mr. Parry’s report quoted former Canadian minister of foreign affairs, Lloyd Axworthy, saying that he sees Trump’s appointment of Friedman as part of a larger pattern: “By bringing in people who are really out of control and have expressed themselves in the most extreme ways to be in positions of power…”

Mr. Parry asserted that Friedman is “seen as a hardliner” and says that “observers” like J-Street, which he describes as “a Jewish advocacy group that supports peace with the Palestinians,” calls Friedman’s nomination “reckless”.

While Mr. Parry mentions that Trump was naturally “gushing in his praise for his nominee,” this CBC report failed to provide a balanced perspective on Friedman’s nomination which would have taken into account the approval of his nomination by several pro-Israel groups and politicians. CBC listeners were deprived of knowing that the following organizations and individuals applauded Friedman’s appointment:

“As president of the World Jewish Congress, I welcomed the opportunity to meet yesterday with Ambassador-designate David Friedman. A thoughtful and accomplished individual, David Friedman is both a proud American and a passionate advocate of the benefits that the United States and Israel have enjoyed from a friendship that has spanned decades. I am confident that he will be an outstanding US ambassador to Israel,” Lauder added.

“Having had the privilege of serving the United States as Ambassador to Austria under President Reagan, I fully recognize it is the president, not any ambassador, who sets American foreign policy,” Lauder said. “I am sure that President-elect Trump has made the appropriate choice in selecting David Friedman to advance the Trump administration’s diplomatic policies.”

“The selection of Mr. David Friedman to serve as United States Ambassador to Israel sends a powerful signal to the Jewish community and the State of Israel that President-elect Trump’s administration will strengthen the bond between our two countries and advance the cause of peace within the region.”

“David Friedman is the first ambassador that tells the truth and promotes the truth,” said Morton Klein, president of the Zionist Organization of America in an interview. This truth, according to Klein, is that “the Arabs want to continue killing Jews” and they refuse to accept Israel as a Jewish state.”

“Rabbi Yechiel Eckstein — president of the International Fellowship of Christians and Jews — said, “David is truly a great American and a loyal ally of Israel, and we look forward to working with him to enhance joint US and Israeli interests.”

“Israeli officials also chimed in, with the Jewish state’s Consul General in New York Dani Dayan saying, according to a tweet posted by a Times of Israel reporter, “I am sure he will be an exceptional envoy of his country to mine.”

“Israeli Education Minister Naftali Bennett — head of the right-wing Habayit Hayehudi party — called Friedman a “great friend of Israel” and Justice Minister Ayelet Shaked — a Habayit Hayehudi member — said Friedman was a strong proponent of West Bank settlement construction. “I’m sure that we will work together in fruitful cooperation,” she stated.”

“Deputy Foreign Minister Tzipi Hotovely — of Prime Minister Benjamin Netanyahu’s rightist Likud party — described Friedman’s appointment as “great news for Israel.” “His positions reflect the will to strengthen the status of our capital right now and the understanding that the settlements were not the true problem in the region,” she said.”

“Yair Lapid — leader of the centrist Yesh Atid party — tweeted, “Look forward to working with Mr. Friedman, the new US ambassador & great friend of Israel, in his rightful office in our capital, Jerusalem.”

“Oded Revivi — the mayor of Efrat and the chief foreign envoy of the Yesha Council (the umbrella organization of municipal councils of Jewish communities in the West Bank) — said, “Friedman has a deep love for all of the land and people of Israel, including those in Judea and Samaria. His knowledge and wisdom of the issues will strengthen the bridge between our great nations.”

The Algemeiner’s headline skillfully and succinctly summed up the situation: “Trump’s Pick of David Friedman as Next US Envoy to Israel Draws Praise From Jewish Right, Dismay From Left.”

To paint Friedman’s appointment as one which was exclusively “under fire” is unfair and inaccurate and to omit mentioning that many pro-Israel groups/individuals support his appointment, was one-sided. CBC Standards and Practices dictates the following about Balance (emphasis added):

“We contribute to informed debate on issues that matter to Canadians by reflecting a diversity of opinion. Our content on all platforms presents a wide range of subject matter and views. On issues of controversy, we ensure that divergent views are reflected respectfully, taking into account their relevance to the debate and how widely held these views are. We also ensure that they are represented over a reasonable period of time.

CBC listeners deserve to know that David Friedman’s appointment is one with divergent views, some who laud his appointment and others who naturally lament it, but for our public broadcaster to present only one side is unfair and from our perspective, was a violation of CBC Standards.

HonestReporting Canada has already filed a complaint with CBC News Editor-in-Chief Jennifer McGuire and we encourage you to add your voice by communicating your concerns to the CBC by sending emails to:  Jennifer.McGuire@CBC.ca.