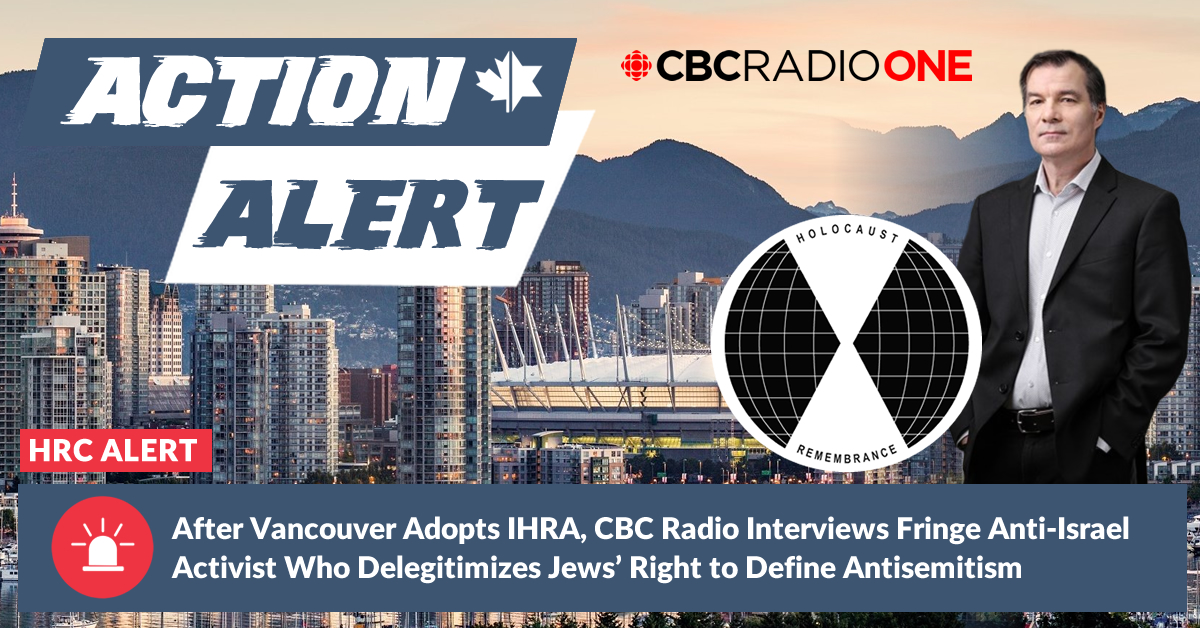 On the heels of the adoption of the International Holocaust Remembrance Alliance’s (IHRA) definition of antisemitism by the Vancouver city council on November 16, a number of media outlets covered this important development.

On the November 17 program of The Early Edition, a CBC Radio One morning news program, host Stephen Quinn discussed Vancouver city hall’s adoption of IHRA, characterizing it as “controversial.”

Rather than selecting an academic or impartial voice for their insights, instead Quinn interviewed Corey Balsam, the National Coordinator of Independent Jewish Voices (IJV).

Though Quinn gave no context of IJV, merely describing it as an organization opposed to the IHRA definition, it is in fact a fringe, anti-Israel group that actively promotes the BDS (Boycott, Divestment & Sanctions) movement against Israel. IJV has also been accused of promoting Holocaust denial.

In his remarks, Balsam repeatedly misrepresented the IHRA definition, claiming that it’s being used as a cudgel to suppress legitimate criticism of Israel.

This is a gross mischaracterization of the definition and a very selective omission of the example.

In fact, the IHRA definition is explicitly clear that “criticism of Israel similar to that leveled against any other country cannot be regarded as antisemitic.”

IHRA’s example reads in full that “Denying the Jewish people their right to self-determination, e.g., by claiming that the existence of a State of Israel is a racist endeavour.”

Denying Jews their right to self-determination in their own homeland is not the same as making criticisms of Israel, despite Balsam’s attempt to conflate the two.

This is not the first time that Balsam has attempted to misrepresent the IHRA definition, and as pointed out by HonestReporting Canada in a past rebuttal of Balsam’s, making criticisms of Israel – even those based on falsehoods and misinformation – does not constitute antisemitism.

In the interview, Balsam also claimed that the IHRA definition, by saying that “applying double standards” against Israel can be an example of antisemitism, argues that it includes “the Palestinian-led movement, for Boycott, Divestment & Sanctions against Israel to hold Israel to account for its human rights violations…”

Here, Balsam is playing fast and loose with the truth.

If one genuinely believes – despite the mountainous evidence to the contrary – that Israel is committing human rights violations against Palestinians, the IHRA definition in no way would characterize that individual as holding an antisemitic view. Instead, what would be antisemitic is applying a double standard to Israel that is not being applied to comparable countries.

As the interview progressed, Balsam’s statements became even more problematic, veering from misrepresenting the IHRA definition to denying Jews the right to define their own discrimination.

Mentioning the Union of British Columbia Indian Chiefs, and their opposition to Vancouver’s adoption of the IHRA definition, Balsam stated that they have credibility to speak out because they saw “settler colonialism here and there,” and “ways in which indigenous peoples are erased and privilege is given to those who are settlers.”

This is an obscene comment to make for two reasons.

Firstly, Jews in Israel are hardly settlers or colonialists. They are part of a three-thousand-year ongoing history of the Jewish People in their ancestral homeland. Describing them as such is no more than a complete denial of their extensive history, indigenous presence and entire civilization.

At another point, Quinn commiserated with Balsam, asking rhetorically why society cannot seem to differentiate between criticism of Israel and antisemitism, even citing a recent news story about Israel, and asking “…if somebody says that’s (an Israeli policy) not a good idea, does that make them an antisemite?”

Contrary to Balsam and Quinn, the IHRA definition in no way, shape or form seeks to demonize legitimate criticism about Israel. In fact, it is quite clear that criticism is entirely valid. But denying the Jewish People self-determination in their historic homeland, and even denying them the right to craft their own definition of antisemitism, is entirely inappropriate. While Balsam has a sordid history in this area, it is distressing to see Quinn, a journalist for Canada’s publicly-funded broadcaster, fail to challenge Balsam’s disinformation. Not only were CBC listeners misinformed, they were deprived of hearing about how IHRA is the consensus and gold-standard tool for defining antisemitism.