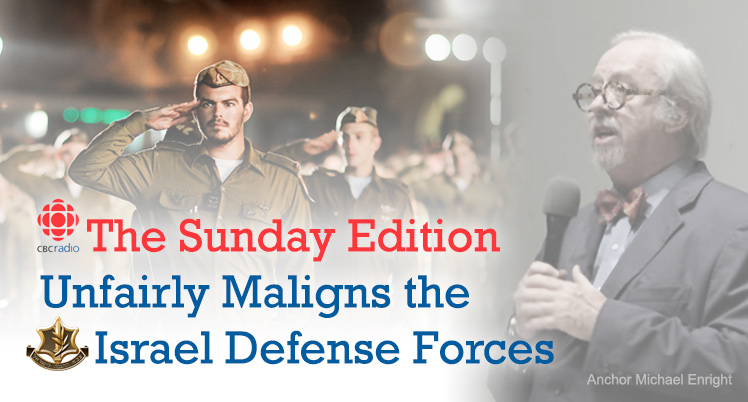 On the October 20 broadcast of the CBC Radio program “The Sunday Edition”, host Michael Enright interviewed Dana Golan, described by the CBC as “a veteran of the Israel Defense Forces” and “former executive director of the Israeli NGO, Breaking the Silence (BTS), which compiled the stories of disillusioned Israeli soldiers in a new book called Our Harsh Logic.” The close to 25-minute radio segment not only indicted the Israel Defense Forces (IDF) for almost everything under the sun, it contained numerous errors, it lacked necessary context, and it unfairly maligned the IDF.

At no time in the interview did the CBC include a live or pre-recorded statement/response from Israeli officials to rebut BTS’ criticisms. The IDF were presumed guilty in the court of public opinion and the CBC was its judge, jury and executioner. To listen to the interview please click here.

Of significance, anchor Michael Enright failed to adequately explore past criticisms of Breaking the Silence, an organization which has been accused of basing reports on hearsay and for using anonymous and unverified sources. The IDF has accused BTS of conducting a “deliberate” smear campaign. Barak Raz, spokesman for the IDF’s Judea and Samaria Division, criticized BTS for “for not bothering to consult with the IDF or ask for its response before publishing its reports, and for not revealing the identities of its sources.”

Raz described the IDF as “a military that holds itself to the highest of standards and prides itself on its ability to self-investigate through processes that are NOT subordinate to any military commander. Even the IDF Chief of the General Staff can’t prevent or stop an investigation!… Breaking the Silence’s refusal to bring their complaints to the authorities’ attention, or enable them to respond before they go public, indicates its unfortunate agenda. Clearly, it does not truly wish to bring the matters to light in order to enable a thorough discussion, but rather to generate negative publicity of the IDF and its soldiers,”

In Ha’aretz, Amos Harel said BTS “is not a neutral observer. The organization has a clear agenda: to expose the consequences of IDF troops serving in the West Bank and Gaza. This seems more of interest to its members than seeking justice for specific injustices.” Likewise, NGO Monitor’ analysis revealed that a previous BTS book “was rife with methodological problems and appeared to tailor the testimonies to predetermined ‘analyses’ that falsely claimed that Israeli actions are not aimed at self-defense but at ‘terrorizing the civilian population.’”

Especially troubling was the following backgrounder the CBC provided on its website and which it read to its listening audience:

“Background: The Second Palestinian Intifada between 2000 and 2005 claimed more than 4,000 lives. Roughly three Palestinians died for every Israeli.

It was a brutal conflict, marred by suicide bombings and rocket attacks on one side, and deadly counter-strikes, indiscriminate raids and widespread repression on the other.

The World Bank estimates that after the four and half year conflict, Palestinians’ average income dropped by more than a third, and unemployment hit 25 percent, forcing almost half of all Palestinians below the poverty line.

Tel Aviv’s most important weapon in its war against Palestinian militants, was the Israeli Defence Forces.

The IDF is one of the most powerful, precise and well-trained armies in the world. It was tasked with upholding the four tenets of Israeli policy: stop terrorism; pursue separation of Israel from the Palestinian population; enforce Israeli law in the territories and preserve the Palestinian “fabric of life”.

All four tenets are supposed to be defensive and preventative, but for Israeli soldiers on the front lines, reality is far more complicated.

IDF soldiers could do anything, and rationalize it as defending Israel. Mock arrests, endless checkpoints, human shields … anything went.

Military service is mandatory in Israel so bright-eyed 18-year-olds were surprised to see the enemy up close. Yes, there were militants and bomb makers, but there were many more innocent civilians and their military orders didn’t seem to differentiate.

This backgrounder failed to convey to CBC listeners that the “Second Palestinian Intifada” was a five-year terror war launched by Palestinians and Israel responded solely in self-defense. This statement also unfairly equated Palestinian terror with Israeli defensive measures as it failed to differentiate legitimate combatant casualties and non-combatants fatalities on each side. The CBC’s version (essentially 3,000 Palestinians and 1,000 Israelis died) implied that Palestinians should be mourned three times as much as Israeli victims. The CBC failed to tell its listeners that most of the 3,000-plus Palestinian fatalities were terrorists, while most Israeli fatalities were civilians. Putting terrorist and civilian fatalities on an equal footing provided an amoral perspective on what actually happened.

Whether deliberate or unintentional, this program’s disparagement of Jerusalem as Israel’s claimed capital was regrettable. The city is home to the country’s Knesset (parliament), almost all government ministries, the official office and residence of the Prime Minister and President, the Supreme Court and scores of other national institutions and organizations. Like every other country in the world, Israel too decided where it would situate its capital.   Foreign governments may choose to not locate their embassies in Jerusalem, but that does not permit journalists to substitute another city (such as Tel Aviv) for that of Jerusalem when referring to the country’s capital. In so doing, writers turn their backs on an incontrovertible fact — Jerusalem (with or without the contested eastern part of the city) is the capital of Israel.

This backgrounder also fell short for the following reasons:

In short, the CBC’s backgrounder represented BTS’ claims without attribution, it presented incomplete information, lacked context and it did not conform to the truth and yet CBC presented it as veracity.

It should be acknowledged that CBC had every right to pursue and broadcast this interview. However, given the serious errors, omissions, and general unfairness of this report (largely due to its failure to include a statement/response from Israeli officials to these criticisms), it behooved the CBC to issue an on-air corrective to set the record straight and to secure a source from either the IDF Spokesperson’s Unit, the Israeli Ministry of Foreign Affairs, or other pro-Israel advocates who could go on-air to rebut the unfounded allegations against the IDF.

HonestReporting Canada held high-level talks with the CBC about how the Sunday Edition maligned the IDF and after communicating the aforementioned concerns, the following actions were undertaken by the CBC:

Enright: “This is from Simon Shapiro in Toronto: What is remarkable is that many Israeli soldiers are compassionate and ethical in the actions they are forced to take. They don’t dwell on the primary cause: Palestinian atrocities against Israeli civilians. The Palestinian leadership steadfastly refuses to compromise, they pretend to negotiate for a two-state solution, but consistently reject all peace offers from Israel. They continue to insist that if there’s a two-state solution the Arab state would be free of Jews, but millions of Palestinian Arabs would have the right to emigrate to the Jewish one. What a remarkable final assertion from Dana Golan that Israel could only make peace after ‘ending the occupation’, I guess she’s very very young and can’t remember how that gambit turned out in Gaza.”

Enright: “These comments were posted on our website by David Price about my introduction to the  interview with Ms. Golan: ‘Phrasing such as ‘indiscriminate raids’, but not indiscriminate rocket attacks, and widespread oppression – imply that Israel is the sole agent involved skipping over the rivalry of Fatah vs. Hamas and the effect of their militias on day to day life. The phrase ‘anything goes’ – no, it doesn’t. This is not Syria, or Egypt or Lebanon or Jordan which one could hold up to compare and contrast… In fact the number of fixed checkpoints run by Israel has been quietly dropping under the current administration… Ending the occupation unilaterally would be easy to do. The problem is dealing with what would happen the next day which would be worse without establishing agreements and mechanisms that work. That’s the lesson that most Israelis have learned from the unilateral withdrawal from Gaza.”

Of importance, we are pleased to relay that the CBC was very receptive to our concerns, acknowledging several areas where their journalism fell below their journalistic standards and practices. While the aforementioned actions undertaken by the CBC marked a step in the right direction, the CBC’s failure to explicitly correct many of its errors was most unfortunate. For example, at no time did the CBC atone for its false assertion that “IDF soldiers can do anything, and rationalize it as defending Israel. Mock arrests, endless checkpoints, human shields … anything goes.”

The resultant effect of the CBC’s errors and unfairness in the production of this interview, along with its failure to adequately atone for its journalistic lapses has led to the demonization of Israel’s armed forces. For which, no remedy is sufficient.