On December 24, CTV.ca elected to publish a hateful comment to its message board forum appended to a CTV.ca article entitled “Israel launches retaliatory airstrikes on Gaza Strip”.

A commentator named “Bob in BC” claimed that “Israel practices genocide against the Palestinian people…” See a screen grab of the comment immediately below: 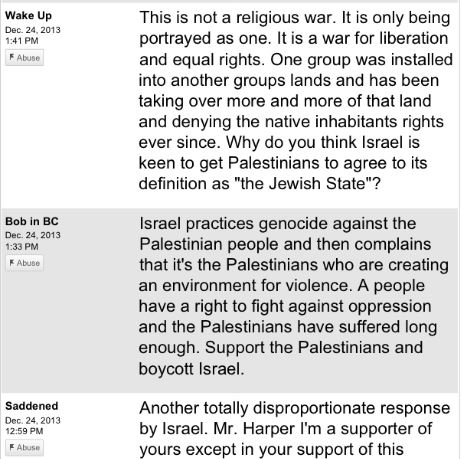 To claim that Israel is practicing “genocide” against Palestinians, meaning that Israel intentionally is trying to wipe all Palestinians off the map, whether men, women or children is beyond hateful and CTV moderators should not have approved its posting in the first place.

CTV’s comment guidelines stipulate that “Bell Media reviews every comment submitted, and reserves the right to approve comments and edit for brevity and clarity. Please be advised: Comments are moderated and will not appear on site until they have been reviewed.”

CTV also claims to not: “… publish comments that are profane, libelous, racist, or engage in personal attacks.”

In light of the serious nature of the matter and as CTV’s own policies were not being observed, HRC contacted CTV requesting that this comment be unpublished. We are pleased to note that CTV has unpublished this comment from its website following our complaint.