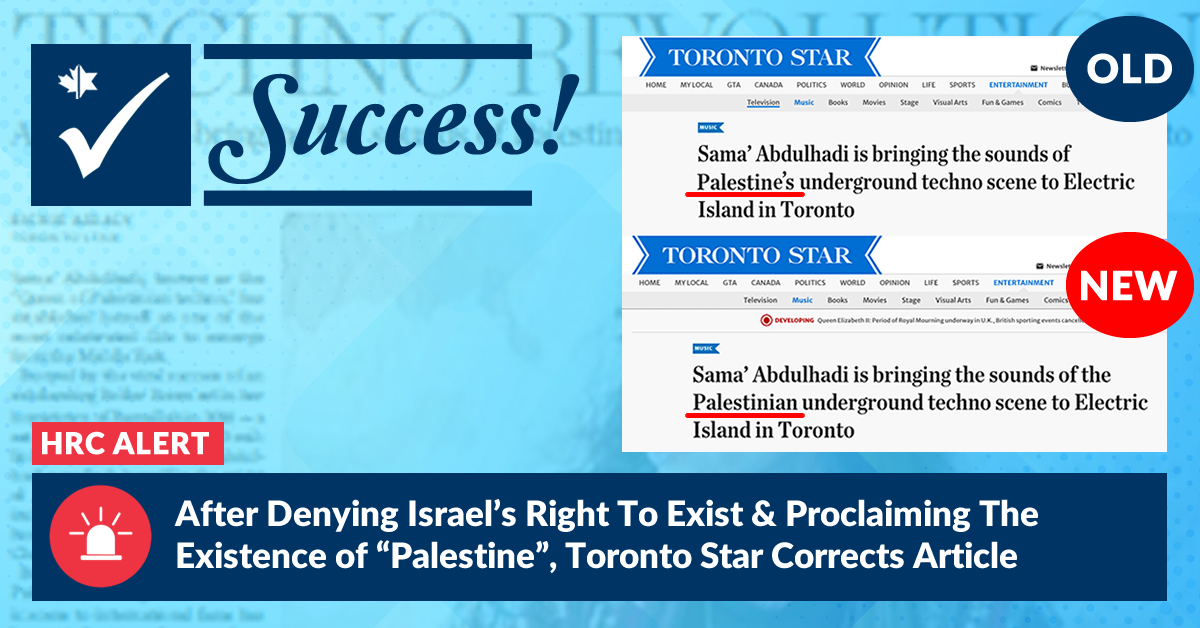 for the Star, about Sama’ Abdulhadi, described as being “one of the most celebrated DJs to emerge from the Middle East whose journey from the Palestinian underground electronic scene to international fame has been winding, tumultuous and politically charged.”

In the article, Richie Asslay stated the following that we took great issue with: (emphasis added) “Despite existing under an Israeli occupation for nearly 75 years, Ramallah is one of Palestine’s major cultural centres, home to a burgeoning hip hop scene, film festivals, crossfit gyms and museums.”

Importantly, Israel achieved its independence from the United Kingdom in 1948, so it is clear that this article delegitimized not merely the lands Israel acquired in a defensive war in 1967, but Israel’s entire existence as a Jewish State by claiming that Israel has been an occupier of Ramallah since its birth. By asserting that Israel has been occupying territories since 1948, the logical implication of this remark is that Israel has no right to exist.

We are pleased to note that the Star recognized this serious error and issued the following correction:

Furthermore, the Star’s headline, sub-headline and references throughout the article repeatedly referred to the Palestinian territories as “Palestine,” despite the fact that the Palestinians have not been granted statehood.

Importantly, the Palestinians do not meet the criteria for statehood for a myriad of reasons, but one of which is that they do not exercise effective control of their land mass. Canada, as a matter of policy, does not recognize a state of “Palestine”.

By way of example, the CBC’s language policies state that: “there is no modern country of Palestine, although there’s a movement to establish one as part of a two-state peace agreement with Israel. Areas under the control of the Palestinian Authority are considered Palestinian territories: Fatah-run West Bank and Hamas-run Gaza Strip.”

HonestReporting Canada communicated our concerns directly with the Star about this issue and we are pleased to note that the September 4 print edition did not feature the word “Palestine,” unless it was stated in attribution, and the online article has also been corrected.

We thank the Toronto Star for implementing this correction action.