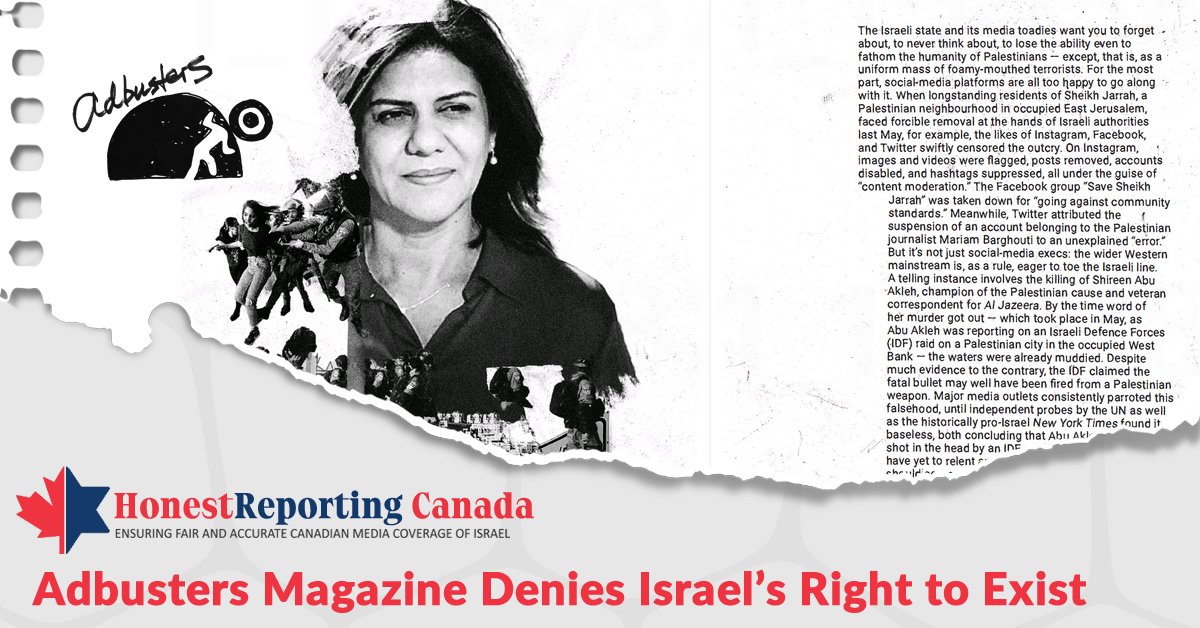 Like a defeated boxer who keeps crawling back into the ring, insisting that the fight isn’t over when it’s long been called, Adbusters is at it again.

Adbusters, the Vancouver-based alternative and anti-capitalist magazine with a long history of publishing anti-Israel content, stooped to a new low in its latest edition on August 2.

The publication’s commentary began with a statement about “the Israeli state and its media toadies,” which insinuated that Israel somehow controls both social media and news outlets as well, who are allegedly “eager to toe the Israeli line.”

Adbusters cites as evidence for this claim a handful of anecdotal examples of anti-Israel posts on social media that were taken down for violating “community standards.” If this is all it takes to demonstrate that Israel controls social media, Adbusters would likely be surprised to learn that antisemitism is still widely being disseminated on various social media networks, including Facebook, Twitter and Instagram, despite its alleged control by Israel.

In the article, Adbusters takes significant liberties with the truth, including referring to Arab residents of Sheikh Jarrah, a neighbourhood in eastern Jerusalem also known as Shimon Hatzaddik, as facing “forcible removal at the hands of Israeli authorities last May.” 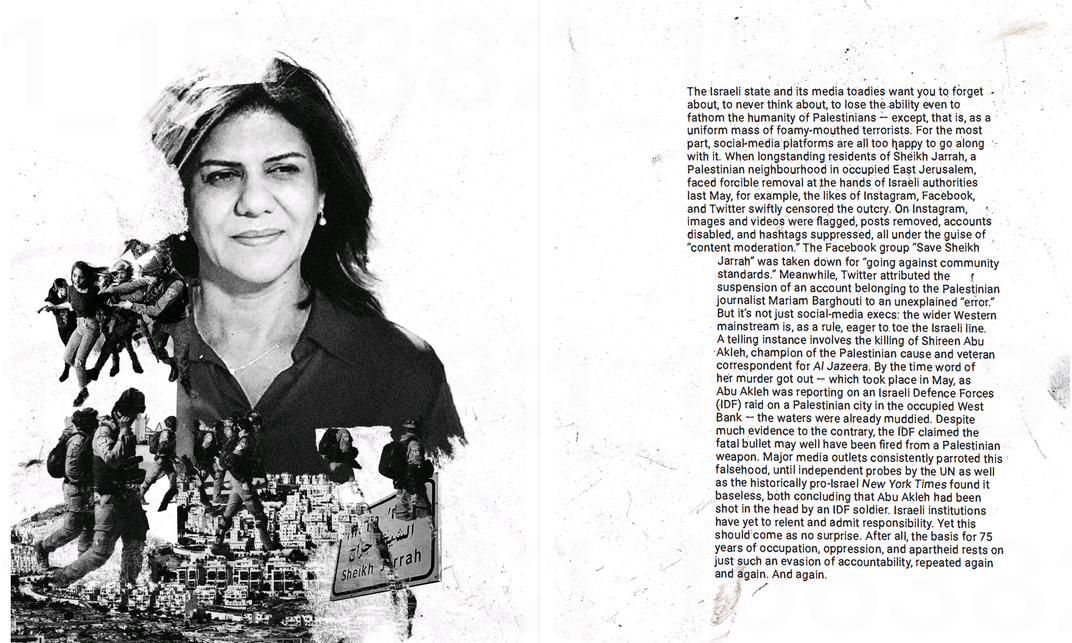 What Adbusters failed to mention is that a Jewish-owned apartment building in Sheikh Jarrah/Shimon Hatzaddik had a group of Palestinian tenants living inside, who – by refusing to acknowledge the building’s legal owners – failed to pay rent for an extended period of time. The owners then brought the case to the Israeli court system, who recognized their legal ownership and ordered the eviction of the illegal squatters. These critical facts, though integral to the context, went unmentioned.

Adbusters also referred to Shireen Abu Akleh, the late Palestinian journalist for Al Jazeera who was killed by an unknown and likely errant bullet during her reporting on a firefight between Israeli soldiers and Palestinian terrorists in the Palestinian city of Jenin on May 11, 2022. The report said as fact that Abu Akhleh was intentionally murdered by Israel. Not only has a US-led ballistics investigation shown that it is still entirely unclear as to whose gun fired the fatal bullet killing Abu Akleh, there is simply no basis that Israel sought to murder Abu Akleh, and making that claim, in the total absence of any evidence, is entirely irresponsible.

Unfortunately, making hateful and unfounded claims is nothing new for Adbusters. In the very same article, the magazine referred to “75 years of occupation, oppression and apartheid.” Importantly, Israel achieved its independence from the United Kingdom in 1948, so it is clear that Adbusters is seeking to delegitimize not merely the lands Israel acquired in a defensive war in 1967, but Israel’s entire existence as a Jewish State.

This slur – that Israel has no right to exist at all – immediately disqualifies any further statements from Adbusters related to Israel, because if the Jewish State’s very existence is challenged, despite the country’s millennia of history and legal rights, then clearly no amount of factual data will ever be relevant, nor will any amount of reasoning or logic suffice for a publication clearly set on demonizing Israel, no matter what.

This latest anti-Israel polemic from Adbusters is merely the most recent in a long string of malicious content produced from the magazine. This summer, Adbusters produced an ad comparing convicted Palestinian terrorist Marwan Barghouti to South African anti-Apartheid campaigner Nelson Mandela.

Adbusters has waded outside of mere anti-Israel misinformation into outright antisemitic messaging in the past, as documented by HonestReporting Canada.

But rather than engaging in an honest retrospective look at its own editorial history, Adbusters’ leadership has refused to do anything but victim-blame, with co-founder and editor Kalle Lasne stating that “If Israel’s propaganda machine accuses us of antisemitism, instead of hedging and retreating…we’ll just give them the finger.”

With Jews representing Canada’s largest target of religiously motivated hate crimes according to the latest data from Statistics Canada, Adbusters’ bravado is not only misplaced; it’s profoundly insensitive.

It’s time for Adbusters to step out of the ring once and for all, and it owes Canada’s Jewish community a big apology and deserves to be named and shamed for its toxic and hateful anti-Israel efforts. Share our alert now to spread the word.